You can understand why the orchestral-world’s men-in-suits are scrambling to get Vasily Petrenko on to their schedules. His incumbency at the Royal Liverpool Philharmonic has completely revitalised that orchestra’s fortunes, and music-lovers are still talking in hushed tones of his appearance with the National Youth Orchestra of Great Britain at the BBC Proms this year.

His debut with the Philharmonia Orchestra hardly broke any boundaries in terms of repertoire, but everything about his approach confirmed his brilliance, intelligence, musical integrity and wisdom – a heavily overloaded apportioning of gifts in one so young (Petrenko is a very youthful 33). His conducting style is effortlessly mobile and incisively defined, with a particularly expressive and independent left hand — and, something an audience picks up on very quickly, his musicianship is big and generous.

Petrenko very much embraced the spirit of Rimsky-Korsakov’s ‘Disneyfication’ of Mussorgsky’s Night on the Bare Mountain, in a highly charged reading big on primary colours and emphatically exaggerated tempos. Once you’ve heard Mussorgsky’s raw original, Rimsky’s version is a stylistic appropriation so complete it could easily segue into Scheherazade. But, as the demons on Bare Mountain may say, what the hell? Here it was, in all its gaudy, vulgar, orchestral-showcase glory, and hugely enjoyable. 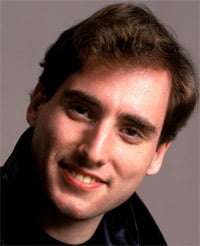 Another powerful example of a wise head on youthful shoulders presented itself with Boris Giltburg in Grieg’s Piano Concerto, in which this 25-year-old pianist seemed to reinvent the work’s vigour and freshness. Aspects of Giltburg’s playing evoked the spirit of Artur Rubinstein, particularly his old-fashioned, patrician style, but there was much more than grandeur here. Giltburg had an instinctive feel for the scale of Grieg’s evergreen piece, teasing out its intimate lyricism with a spacious finesse and tact, and he gave the big moments their due – the first movement cadenza and the closing pages of the finale had all the hallmarks of a great performance. It was very impressive, full of detail and involvement, and with a clear overview of the work as a whole that meshed perfectly with the carefully calibrated romanticism of Petrenko’s approach.

Being familiar with his recordings for Naxos, I was bracing myself for something special with Shostakovich 5, which Petrenko duly delivered. Most importantly, he clinched the work’s ambivalence, particularly in the massive finale – triumphant affirmation to appease the ears of Soviet authorities; hollow, pointless victory for those with ears to hear – in a reading of awesome, unflinching power that had all the bombast of affirming peroration that brooks no opposition. It’s a mystery where music of such bleak eloquence comes from; and it’s just as big a mystery where a performance of such stature comes from. Petrenko’s speeds, for the first and third movements in particular, were on the slow side, giving the music a feeling of discretion and focus. The Philharmonia’s strings were on magnificent form, producing a huge range of colour and attack, and the half-lit expressionless, non-reflective sound they produced during the slow movement was spine-chilling. For conductors, Shostakovich is an unstoppable growth industry, but on the evidence of this Fifth, in its energy and passion, and with a musicality that suggested rather than hammered home its meaning, Petrenko is a major player.