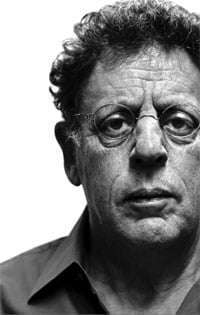 In 1976, two maverick artists hired the Metropolitan Opera in New York and presented a five-hour ‘opera’ in which nothing happened. They sold out the house – twice. The composer was Philip Glass and the director Robert Wilson, and the show was Einstein on the Beach, only now given its UK premiere as part of a world tour. It’s a daunting proposition: five hours without a break (though members of the audience are invited to come and go as they please). It’s also a challenging production to mount, something that anyone present at this first-night of the Barbican Theatre’s short run was all too aware. At the work’s heart is the figure of Einstein, portrayed by a violinist required to have the stamina of an athlete. But it isn’t a portrait of Einstein; he is merely a symbol for something – who knows what – and a starting point for Glass and Wilson’s mad and repetitive flights of fancy.

Let’s be clear: Einstein isn’t an opera. You can call it what you want – it’s doubtful that Glass and Wilson would care – and it contains far more dance than singing. It’s a minimalist variety show: a bit of Dada, some energetic ballet, and choruses of number-singing. If you don’t care for a scene, another will be along in half-an-hour. At its best, Einstein on the Beach is hypnotic, with rapidly spinning musical repetitions that induce a state of semi-delirium. At its frequent worst – such as in the aptly named ‘Trial’ scenes – it holds all the dramatic and musical appeal of someone continually clicking a pen.

The ‘Dance’ sequences opening Acts Two and Three example the former. Glass’s music pulsates, becoming physical through repetitions (many removed from the recordings). Dancers dressed in white spin in formation; a beam of brilliant light seems to offer cleansing purity. The penultimate and most spectacular scene, ‘Spaceship’, offers a similar intensity: a three-levelled wall of orange lights operated by dancers and musicians seems like something out of Fritz Lang’s 1926 silent-film Metropolis: its trance-inducing patterns almost making Einstein’s longueurs worth sitting through. Almost!

But, conversely, the tremendous tedium of certain parts reminds how much of the cabaret fails to achieve that level of intensity. ‘Trial One’ and ‘Trail Two’ involve lengthy stage re-sets – black t-shirted techies dragging bits of set on and trying to match the mechanical march of the dancers as they shuffle away – but the music and action (such as it is) offer only grey inactivity, with spoken texts that are too inaudible to grab the attention. ‘Bed’, which precedes ‘Spaceship’, sees a huge bar of light lift from the stage and rise up beyond the limits of the proscenium arch: it might have astonished thirty-six years ago, but today only reminds of watching the progress bar crawl from 1-percent to completion on a computer-virus scanner.

Wilson and Glass have spoken often of the piece’s lack of meaning; of a liberating lack of development or plot. Indeed, looking for meaning becomes the proverbial wild-goose-chase and when you think you’re onto something, the sheer mass of unconnected material tells you otherwise. The creators seem to delight in throwing us off the scent, to the extent that one concludes that most of Einstein equals nothing. There are themes, hidden within the scatter: it seems at some points to be a secular oratorio, with Einstein as prophet of the power of numbers. Maybe the period references – Pattie Hearst; Mr Bojangles; The Beatles – are the white noise of humanity; the radio material inevitably beamed out into cold space to the indifference of the gods. Or maybe they’re an attempt to look cool; to convince 1970s’ New York that ‘opera’ can play with popular culture too.

Whether one is convinced or not by the overall project, there could be no denying that this first-night performance was carried by its musicians, dancers and actors. Some of the current instrumentalists can boast a long association with Glass. Michael Riesman has led every performance of Einstein, though his fingers seemed to have trouble on the keyboards at around the four-hour mark! He was joined by wind-players and vocalists of quite astounding concentration, able to sing and play the same patterns for twenty minutes and stay together. The stamina of violinist Antoine Silverman – dressed in his Einstein outfit – was remarkable. And the chorus of singers/dancers was something to behold: the rapidity of ‘Knee 3’ displayed a precision of vocal ensemble I barely believed possible.

The technical team had a very bad night, though. Reports suggest that the problems have now been fixed, but the first night was plagued: scenery that wouldn’t behave; miscued curtain raises; stage-hands scampering off in full view; lack of light for the ‘Spaceship’ set causing one musician to take matters into his own hands and bellow for “more light” for what seemed several minutes. Problems with flying elements caused the show to be halted about two hours in, though the twenty-minute break was much appreciated.

We must be very different people to those who saw Einstein four decades ago. Time has become the essence of culture: MTV is usually blamed, but pace is critical and time itself is not to be wasted. Einstein on the Beach forces a different measure of existence on its audiences, one that can be as infuriating as it is enchanting. But Einstein on the Beach is hugely uneven and, for long stretches, very boring. It has the feel of an experiment perpetrated by people who didn’t really know what they were doing. It’s a relic of an earlier era.