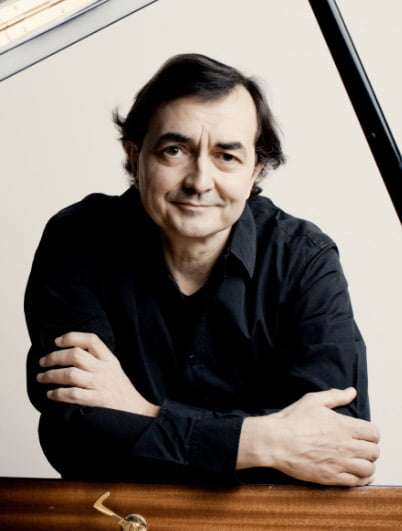 Unlike a lot of religious art of the past century or so, much it of feeble, glutinous sentimentality, the best of French Catholic music has trodden a fine line between spirituality, humanity and imagination with assurance, and in his mighty Nativity sequence of Vingt Regards, the twenty ‘gazes on’/’contemplations of’ the Infant Jesus, premiered in 1945, Olivier Messiaen goes a few stages further to create music that is as much a litany of veneration and meditation – though at over two hours considerably longer – as the Rosary or Stations of the Cross.

Pierre-Laurent Aimard studied with Messiaen’s second wife, Yvonne Loriod, so you’d take his affinity with Messiaen’s music for granted, but his engagement with Vingt Regards is something else. You could see him taking a deep breath – there was a long gap between his sitting at the piano and starting to play – before entering the composer’s mystical universe of sensuality, revelation and meditation. Aimard has a level of command and understanding to which resistance is futile. In the strange way that music can suggest physical form (which I suppose is a form of synaesthesia), Aimard seemed to delineate the contours of God’s benign gaze in the first piece, ‘Regard du Père’, through the medium of sound, in this case the sequence of chords, the God-motif, that threads through the sequence, and Aimard was uncannily in tune with the sense of religious mystery pervading the whole work, which even an interval couldn’t dispel.

Under his guidance, Messiaen’s scheme of aural symbolism created its own logic, so that the composer’s flowery programme notes – for example, “Descending in a spray, rising in a spiral” for the third Regard, ‘L’échange’ – seemed to be both translated and explained by the music. Aimard didn’t live for the moment, so that we never felt we were being treated to a parade of apocalyptic climaxes and sublime stillness, and he was very astute in relating the big events to a magisterial overview, all the elaborate passagework and hypnotic repetitions – just like in a litany – coalesced into the whole, and he judged perfectly the long-drawn-out leave-takings and the unexpectedly vertiginous closures of the various pieces.

He made everything seem so easy and natural, although technically the work is a tour de force. His virtuosity in the sixth Regard, ‘Par Lui tout a été fait’ (By Him was Everything Made), was incandescent, a fugal explosion of elemental force, music’s biggest Big Bang, against which you could set the Liszt-like ‘Regard du Fils sur le Fils’ (Gaze of the Son upon the Son’), with birdsong hovering high above the reappearance of the God-motif, and Aimard threw himself into the ferocious rhythms of the tenth piece, ‘Regard de l’Esprit de joie’ (Gaze of the Spirit of Joy) with infectious abandon. But there was one moment, in the final section, ‘Regard de l’Eglise d’amour’ (Gaze of the Church of Love), when the music heaved itself up to a colossal unison, that made you aware of the stamina required to sustain such a performance. After the tumultuous close, there was a long pause, then a spontaneous standing ovation. With its extravagant imagery and hallucinatory narrative, this had been the musical equivalent of the Book of Revelation, and Pierre-Laurent Aimard was its high priest.