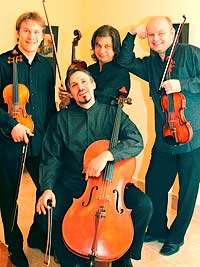 A concert dedicated to the memory of Andrzej Panufnik (who died 20 years ago) might have been expected to feature one of his pieces, but this programme was still welcome in its juxtaposing relatively unfamiliar music – culminating in a rare revival for one of the more significant chamber works from the late-nineteenth-century.

The first half focussed on Szymanowski, whose current reputation is by no means in proportion to the range of works played, beginning with half of the Kurpian Songs (1932) which demonstrate his belated appropriation of Polish folk-idioms at its most distilled. Unlike Bartók, he had few qualms over the combining of indigenous vocal sources with his own piano accompaniments in settings poised between arrangement and original composition. The outcome is an evocative fusion between artless simplicity and the subtlest of post-impressionist modality, which was limpidly though affecting rendered by Olga Pasichnyk and Kevin Kenner.

Szymanowski’s Second String Quartet (1927) confronts rather more pressing issues of formal and expressive elaboration, making for a compact yet wide-ranging piece that largely eschews the harmonic luxuriance of its better-known predecessor. Bartók’s own Second String Quartet of a decade earlier is evident in the three-movement format, though Szymanowski is less concerned with underlining emotional extremes than bridging the divide between them. Thus the restless manner of the opening Moderato reaches a provisional resting-point which the ensuing Vivace does not so much deny as intensify through its capricious interplay of ideas and gestures. Nor does the final Lento amount to a negation: instead, the initial introspection grows in conviction towards an affirmative close which also brings the work’s conflicting elements into unified accord – an accord that the Szymanowski Quartet conveyed in full measure with this vibrant and increasingly impassioned performance.

Panufnik himself may not have featured in this concert, but the composer’s daughter Roxanna – best known for her choral music – contributed a set of variations upon the Polish folk-song Hail! Woodland Violet!. Originally a piano piece, Second Home (2011) was transcribed for string quartet before reaching its present incarnation for piano quintet with optional singer – Pasichnyk giving a soulful rendition of the theme at the beginning and the end; between which the four variations range from inward nocturnal to virtual boogie-woogie prior to a wistful (second?) homecoming. Eight minutes passed pleasantly enough thanks to another stylish performance.

Had he died before writing what proved to be his final work, Juliusz Zarebski (1854-85) would barely be even a footnote in musical history. As it is, his Piano Quintet (1885) confirms a feel for Lisztian harmony allied to a commanding formal sense that should have been the springboard into an eventful maturity and, even so, is not so far behind those of Brahms and Dvořák as a contribution to the medium. The present performance had the measure of the first movement’s quirky yet compelling take on sonata-form, its finely contrasted themes combining in a tensile development before the varied reprise then a suddenly and only briefly inward coda. The Adagio frames its lilting central section with a melody of rapt fervency, which is itself framed by music of a ‘Forest murmurs’ atmosphere, while the scherzo likewise surrounds its wistful trio with music of intently rhythmic propulsion. If the final Presto is at all less distinctive in thematic content, it remains a fine instance of sonata-rondo thinking – hinting, moreover, at aspects of those from earlier movements which crystallised in the affirmative but never overwrought coda. If these artists are contemplating a recording then so much the better, as the piece cries out for a modern account to enhance its profile as a chamber work of high standing.

An impressive culmination to this concert – following which Kenner and the Szymanowski members still had enough in reserve for the slow movement of Chopin’s Second Piano Concerto, in a transcription for piano quintet that admirably and idiomatically captured the emotional poise and vulnerability of the Bellini-inspired original.