A fortnight before this “St John Passion” Mark Padmore had thrown down the gauntlet for conductor-less Passions. This Academy of Ancient Music performance provided ample corroboration of Padmore’s view that conductors are not always necessary, and can often be a nuisance. 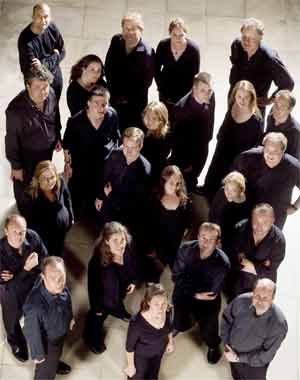 Stephen Layton, founder of Polyphony, conducted his singers and the AAM, in a performance of J. S. Bach’s “St John Passion” that, while often exciting, lacked cohesion and failed to come close to the heart of the work.

The opening chorus offered a representative taste. Bach’s tumultuous churning strings and achingly pungent suspensions were glossed over with a bland smudge of top-heavy orchestral sound, but the initial violent cries of “Herr” from the chorus were genuinely shocking. En masse the well-drilled, youthful voices of Polyphony were capable of an arresting, muscular sound. But they lacked character and maturity, too often falling back on a merely agreeable sound in the Oxbridge tradition. The Passion story requires more depth of emotion.

Though much preparation had clearly gone into precision-training the choir, the choruses were notably scrappy in places, due in large part to the perversely fast tempos adopted by Layton. Many of the ‘crowd scenes’ were reduced to a garbled, nonsensical mess as the choral singers struggled to keep up (“Kreuzige!” and “Wir haben ein Gesetz” were especially bad, both entirely devoid of the crucial gravitas Bach’s setting demands). By taking everything at such a pace, Layton stripped the work of its contrasts, and ensured that the truly electrifying moments had less impact (the impressively rendered “Wir haben keinen König den Kaiser” being a case in point).

Ian Bostridge was on mixed form. An authoritative, if somewhat mannered, Evangelist, he struck an imposing stance just to the right of the conductor. His emphasis on the lyrical rather than the narrative aspects of the Evangelist, while dividing opinion, was always engaging. Bach’s Evangelists are notoriously demanding roles, however, and Bostridge unwisely took on the tenor arias as well. The challenging “Erwage, wie sein blutgefarbter Rucken” was little short of a car-crash, as Bostridge’s struggles with the upper reaches of the melody became increasingly uncomfortable, and one of the two obbligato viola d’amore players lost her way and had to be rescued by the organist. For a moment it seemed as though Layton was going to cut his losses at the conclusion of the exposition, but performers and audience alike were forced to endure more embarrassment through the da capo reprise.

Other solos were more successful, notably Carolyn Sampson’s beautifully effortless “Ich folge dir gleichfalls”, which managed to retain its poise despite Layton’s harried tempo. Roderick Williams gave impressive readings of the bass arias, his well-rounded tone nicely suited to Bach. Michael Chance’s countertenor is well past its prime, yet he can still captivate through strong performances: “Es ist vollbracht!” was the most spell-binding moment of the evening, an intimate and much-needed moment of calm respite, greatly moving despite an ineffectual solo gamba.

The chorales were brisk and perfunctory, Layton often bulldozing through Bach’s phrasing. Second verses were unaccountably performed by the choir a cappella, an unwise decision not only because it ignored Bach’s orchestration, but also because it revealed an artificially refined choral sound.

Layton’s relentlessly breathless reading, with its arbitrary highlighting of various lines of the choral text, lacked integrity. There were a few moments in the Padmore/OAE account when a conductor’s guiding hand might have helpfully moved things on, but overall that performance was exceptionally thoughtful and visionary. The AAM and Polyphony might now question whether they, too, should dispense with the services of a conductor for their next Bach Passion.