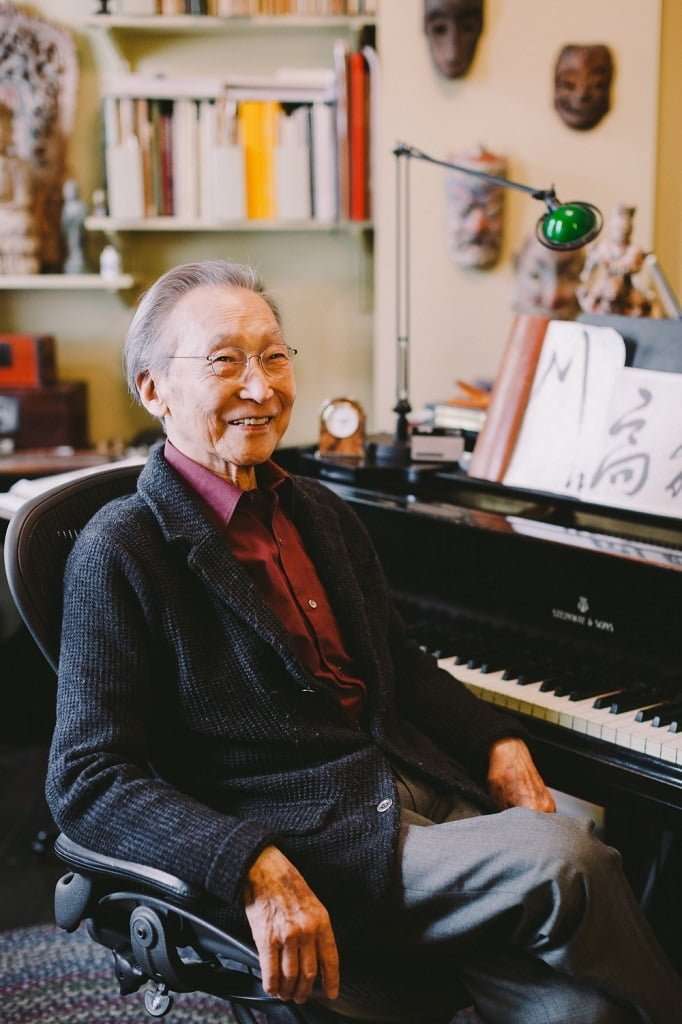 Miller Theatre, at the entrance to the Columbia University campus, has been a major center of activity on the New York new-music scene for many decades, well known for its Composer Portraits concerts, including John Zorn, Kaija Saariaho and Roger Reynolds. This first of the new season honored Chou Wen-chung, born on 29 June 1923, now in his ninety-first year and still active and lively – as became immediately apparent during his post-intermission interview. Chou has a special relationship to the Columbia community, and the School of the Arts in particular, having served with distinction as Dean.

Chou may be best known to music-lovers for two reasons. First for his composition, remarkable for the fusion of Eastern and Western elements, and not only regarding materials, for a solid sense of integration also pervades his creative process, his approach to formal design, and his overall aesthetic. Secondly, he has long been associated with the music of Edgard Varèse (1883-1965), with whom he initially studied, and then became his assistant, trusted friend and executor/editor of his manuscripts. It is interesting to note that Chou, like his mentor, stopped composing in mid-career, only to resume with renewed energy in his later years.

The typical format of a Portrait concert presents a number of different ensembles or soloists at the service of the chosen composer, enabling a listener to perceive stylistic elements that cut across different genres and instrumental timbres, here string quartet, percussion group and a diverse ensemble, all brilliant advocates and their performances were exemplary, providing a fast-forward survey of chamber music history, from the strings which ruled the Classic-Romantic era, into the twentieth-century age of percussion, and the mixed-timbre mainstay of our own time ushered in by Schoenberg’s Pierrot Lunaire.

All three of these Chou works have similar features: a fondness for vivid contrasts (especially in dynamics and timbre), great sensitivity to instrumental color, and exquisite subtleties of articulation and gesture. The precise punctuation and gentle quasi-glissando sighs of String Quartet No.2 (2003) were especially moving in this regard. Much of it is imitative in texture, since the work was begun as commentary on J. S. Bach’s Art of Fugue. As a result, canon and fugue underlie each of its movements. The impression is not at all one of strict polyphony. Instead, one is immediately aware of uniquely magical sonorities. The Brentano Quartet members handled the shifting colors and layered textures with great skill and sensitivity.

The other two works – Echoes from the Gorge (1989) and Ode to Eternal Pine (2009, dedicated to Elliott Carter) – had taken their cue from earlier pieces composed for Asian instruments, “translated” adroitly to a Western soundworld. Chou’s way of expanding small motivic cells, and his striking use of imitative polyphony, are both in the spirit of Varèse, but by way of Webern (and, at times, John Cage). Rarely has silence been so expressive, and individual sonorities linger in the memory, the shimmering overlap of cymbals and gongs, or, in Ode to Eternal Pine, a brilliant doubling of bass clarinet, large drum and lowest-register piano.

It’s hard to hear Echoes from the Gorge, for percussion, and not – if only for a moment – think of Varèse’s Ionisation. But where Varèse’s ensemble is single-mindedly overpowering, Chou’s is multifaceted: by turns whispering, teasing, and jolting. Unlike his mentor, whose writing could be expansively swashbuckling in a post-Wagnerian manner, Chou offers an equally ‘Romantic’ sensibility of great subtlety and nuance. It was a delight to see him at Miller Theatre.