Priscilla, Queen of the Desert – the musical

Book by Stephan Elliott and Allan Scott, based on the Latent Images / Specific Films Motion Picture distributed by Metro-Goldwyn-Mayer Inc 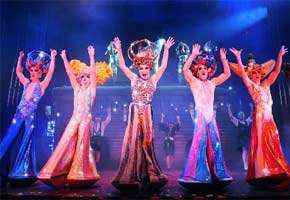 Fifteen years ago an Australian film, “The adventures of Priscilla, Queen of the Desert” was a camp hit worldwide. Although it followed the success of “Strictly Ballroom”, it was still a gamble and a subject that might not necessarily have appealed to a general cinema audience. But it seemed to work, this tale of three drag queens, or rather two transvestite performers and a transsexual, who go on a journey across Australia from Sydney to Alice Springs, providing entertainment and outrage to those they meet on the way. It gave a lift to the career of Terence Stamp who played the transsexual Bernadette, a role against type, and provided a platform for relative newcomers Hugo Weaving, who went on to do the Matrix films, and Guy Pearce, British-born émigré to Australia who had worked on the soaps “Neighbours” and “Home and Away” but became a major Hollywood player after “Priscilla”.

The screenplay and the direction of the film was by Stephan Elliott who has re-written the book for the stage musical of “Priscilla”, which was an immediate hit two years ago in Australia. There is no original music in the show; instead it relies on ‘golden oldies’ to provide the ambience or the mood for a scene. So we get a show with such copper-bottomed hits as ‘Downtown’, ‘I say a little prayer’, ‘Don’t leave me this way’, ‘I will survive’, ‘Hot stuff’ and ‘Both sides now’. The effect works for the most part, although there is the sound of barrels being scraped for the inclusion of ‘MacArthur Park’. However, since many drag-acts still insist on miming to real singers, as they do here in this show within a show, the effect is not out of place.

The book tells three stories. Tick (or Mitzi) is tired of the Sydney drag scene and yearns to get out of town if only to see the young son he had with his now ex-wife who runs a club in Alice Springs. Bernadette, the transsexual (real name Ralph) has lost her life partner and become a bitter, shrewish figure who has given up on happiness. Adam (Felicia) just has a simple ambition to sing the songs of Kylie Minogue while perched atop Ayers Rock or, as Bernadette so lovingly puts it, “a cock in a frock on a rock”. Their three stories combine in a journey that finds them learning something about themselves and their companions, and about life itself. 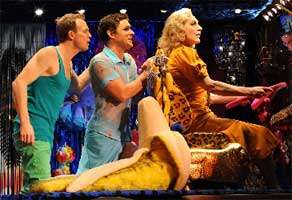 However, it doesn’t stay serious for too long and the jokes – mostly rude and crude – come thick and fast; well, what else would you expect from three screaming drag queens? Oliver Thornton as Adam (the Guy Pearce role in the film) is the most outrageous of the three, as irritating as they come but still very funny and with a body to kill for. Jason Donovan, who incidentally was the first choice for Tick in the film (he turned it down for something else that died the death) is rather more restrained as the ex-husband and father, but allows himself the odd bit of campery. Tony Sheldon, who created the stage role of Bernadette in the original Australian production, is just perfect as the sad case, the transsexual with no place to go. While there’s a touch of the synthetic about the other two dragsters, he brings real emotion and sympathy to a difficult role. And I bet he does an ace impression of Bette Davis. The other leading male role is that of Bob, a handyman they meet on the road. He’s shacked up with an unpredictable Thai bride until he meets Bernadette … but that’s another story and one that’s well handled by Clive Carter.

Looming over the cast is the real star of the show, the title character, Priscilla. She’s the bashed-about old bus in which the threesome hit the rocky road. Priscilla is present for most of the show, dominating the action, spinning, turning and providing a refuge and sometimes even a platform for these glamorous but lonely souls. She even gets her own credit in the programme: “bus concept and production design by Brian Thomson”. The only thing likely to upstage the bus are the costumes, designed by Tim Chappel and Lizzy Gardiner who both won Oscars for their work on the film of “Priscilla”. Generally the show is loud but nothing is as loud as the costumes, which are so over the top they would put the Folies Bergère to shame. Parade after parade of shimmering, glamorous gowns are presented much like a Paris fashion-show. “Priscilla” is the best-dressed show in town.

It is either odd or just a sign of the times that three of the best musicals in town, “Hairspray”, “La cage aux folles” and “Priscilla”, all contain elements of transvestism. The first two are still aimed at family audiences but the very funny if crude humour of “Priscilla” will not endear it to your maiden aunt, your mother, your local headmistress or abbess. However, its combination of familiar music performed by an energetic company, with comedy, camp and outrageous costumes will ensure it a long life in London. This bus will run forever.