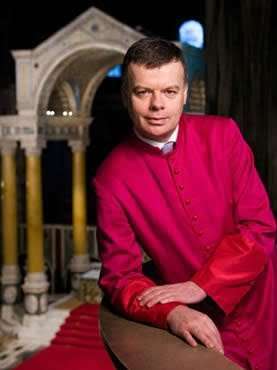 If only all organ recitals could be as enthralling as Martin Baker’s. The “Pull Out All the Stops” concerts and recitals marking the restoration of the Royal Festival Hall’s Harrison & Harrison instrument haven’t always ventured far beyond the footlights, but this one, as much down to Baker’s programme as his electrifying playing – dissolved the barriers between instrument, performer and audience.

As Master of Music at Westminster Cathedral, Baker is used to handling an acoustic more atmospheric than the current venue, but he turned this to his advantage in everything he played. Details often blurred or lost were revealed in all their contrapuntal or rhythmic glory, and Baker’s canny registrations capitalised on the clarity and candour of the organ’s timbres and colours. Man and machine were one.

The stops Baker chose for the opening of Edward Bairstow’s Sonata briefly made it sound like César Franck, and reinforced the impression I’ve always had that the organ’s default sound tends more to French than English style. Although Bairstow’s opening theme nods to Elgar, Baker didn’t encumber this 1937 work with Edwardian upholstery, the wonderful scherzo sizzled with linear Thirties style, and in Baker’s controlled overview the slow build of the finale established the stature of this marvellous piece.

Simon Holt’s The Legend of Melusine revisits the bizarre legend of the cursed siren who changes into a mermaid when she bathes every Saturday, a transformation she forbids her poor husband to witness. But he spies on her and things end very badly. It’s the sort of folk-story with which Angela Carter would (probably did, for all I know) would have had a field-day, and Holt’s 10-minute piece brilliantly locks expressive horns with it. Melusine’s story (to a folk-style text by the composer) was sung by a ghost, here the treble Louis Negri, whose haunting, discreetly amplified voice confidently got to the heart of the music’s declamatory writing. The hyperactive stasis of the fiendishly difficult organ part, with its rhythmic complexity, stabbing chords, angular pedal part and eerie, enclosed, melismatic lines, wove a wild spell in Baker’s commanding playing. We’ll be hearing a lot from solo trebles in two weeks’ time, but they won’t be singing anything as demonic as this. Holt’s music, with shades of Messiaen and Britten underpinned by elemental menace, has a hot line to a nightmarish, half-glimpsed consciousness, and both Negri and Baker did it proud.

The Festival Hall organ is also particularly suited to the North European baroque, and Baker showed off the distinctive presence of its organo pleno in a majestic performance of J. S. Bach’s big C major Prelude and Fugue. Baker then capped his recital with some astonishing, visceral playing in Widor’s Sixth Organ Symphony, a performance that proudly declared the organ’s affinity to the orchestral, Cavaillé-Coll instruments, with caressing string stops, subtly varied foundation work and incisive reeds. Those who know Widor’s Mass for two choirs and organs will know how this Symphony takes his shock-and-awe style to extremes, and in the first movement Baker’s playing was incredibly tight and incandescently virtuosic. In the Adagio, he used an almost comically broad tremulant, clinched the idiomatic French bravura in the ‘Intermezzo’, and went for the finale with breathtaking flamboyance. Sometimes these Symphonies get lost in a big acoustic, but Baker’s chutzpah and faultless sense of direction made the piece take off. The programme, by the way, printed the movements of Widor’s Fifth Symphony, with no relation to the note itself.

The recital was introduced by the President of the Royal College of Organists, Catherine Ennis, another fine player, who talked about the College’s recital project for its 150th-anniversary and also revealed that she’d be giving Martin Baker instructions for an improvisation after the Widor. These turned out to be brief motifs from Mozart’s F minor Fantasia, Bach’s D minor Toccata and ‘that’ Toccata by Widor. Baker is a noted improviser, but here he surpassed himself, and may have made the organ’s curators a bit nervous.