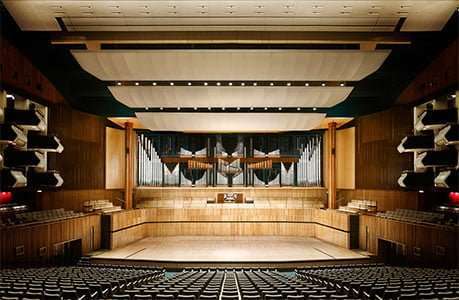 After its complete renovation and refit, the organ that Vaughan Williams hated and Britten admired when it was first heard and seen in 1954, is back in service. Removed in 2005 when the Royal Festival Hall closed for refurbishment, its protracted move back into its reconfigured and shallower space started in 2007, amid dark urban-myth-type rumours that some of the pipe-work had gone AWOL.

The organ’s curator William McVicker, an urbane figure far removed from the caricature organ anorak, pointed out in the pre-concert talk that the RFH’s acoustic is now much more responsive and full, and the immediate impression of the sound is that the organ possesses the space without overwhelming it. And, visually, it completes the picture of the Hall’s interior as a 1950s, Festival of Britain icon – a fact that ‘organistas d’un certain age’ may have taken for granted over the past 60 years – but there they are, both Hall and Organ, in all their open-plan, functional splendour.

The Gala itself was a rather safe affair with some nods towards roof-raising musical pyrotechnics, a secular service of rededication that deferred to community – an aspect at the centre of the Southbank Centre’s prodigiously comprehensive Pull Out All the Stops festival – and to the more accessible range of contemporary music. 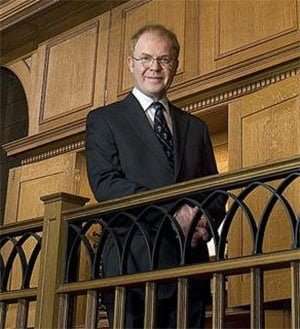 John Scott and the large brass ensemble caught the flavour of nineteenth-century pomp at its vaguely Catholic, swaggering best in the Gigout, although it’s a piece that depends for its effect on reverberation and plenty of it. In his solo piece, Scott didn’t deliver the slow burn and build of the Bach Passacaglia and Fugue, so that his brilliant flourish at the end came as a surprise. The clarity of sound and the apposite registrations were something else, though, bursting with lucid detail.

Isabelle Demers conjured a wonderful palette of colours in the unattributed arrangement of the two Mendelssohn items, which also celebrated the wide spread of sound, rather like the Living Stereo hi-fi of the 1950s. Demers’s performance of the Dupré Prelude and Fugue confirmed her formidable brilliance, which didn’t come over as strongly in the cautious Mendelssohn ‘Scherzo’, in which you were aware more of tricky cornering between manuals than mercurial lightness of being. Alison Balsom’s sensuous trumpet-playing bloomed seductively out of David Goode’s incisive, rhythmic accompaniment in her arrangement of J. S. Bach, the different timbres sparking of each other.

Having recently heard Peter Maxwell Davies’s Solstice of Light (in a concert given by the Elysian Singers), I was anticipating some portentous organ scoring in his A Wall of Music. But it went hand in hand with the unaffected directness of Jo Shapcott’s poem, Questions for the Machine. The organ part is reflective and the huge children’s choir was assured in chromatic twists. Beefed up by some limber brass fanfares, it was a touching tribute to the returned instrument.

The opening direction on the score of the recently-late John Tavener’s Monument for Beethoven is “Awesome, monumental”, and the music lives up to it. The piece’s juxtaposition of mighty chords, choral whispers (the excellent Elysian Singers directed by Sam Laughton) and torrential downpours of notes on the organ (John Scott in full-on Messiaen mode) will hold no surprises for Tavener fans and un-fans. The music made its point very quickly, arriving a quarter of an hour later at a quote from the end of the Missa solemnis.

Jane Parker-Smith injected some glamour with her arrangement of Liszt’s Mephisto Waltz, but despite the technical wizardry and imaginative registrations, the piece still only flirted with the devilish, edge-of-seat flamboyance of the piano original. Parker-Smith drew the ear into the organ’s beautifully voiced Cavaillé-Coll potential in César Franck’s Fantaisie, a ten-minute piece that gives you a few inspiration highs and a lot of pedestrian lows from this variable composer – It’s really not that thrilling a piece.

Like many a gala, this one went on a bit too long, and, apart from the Bach Passacaglia, it was a pity not to have had at least one more major organ work on the programme (and one less arrangement), but those are much in evidence in the forthcoming series of recitals. Bearing in mind the hour-long 5.55 recitals of the 1950s and 1960, it will be interesting to see how big audiences are for full-length organ concerts. After many years of attending them, I still have a problem either gazing at the player’s back or his or her invisibility – and it’s something concert organists, no less aware of it now than they were then, have yet to solve. But welcome back to this remarkable Harrison & Harrison instrument – you’ve been missed.