Putting It Together
A musical review [sic] of songs, music & lyrics by Stephen Sondheim from The Frogs, Do I Hear a Waltz?, A Funny Thing Happened On the Way to the Forum, A Little Night Music, Dick Tracy, Assassins, Anyone Can Whistle, Sweeney Todd, Merrily We Roll Along, Follies, Company, Sunday in the Park With George, Into the Woods 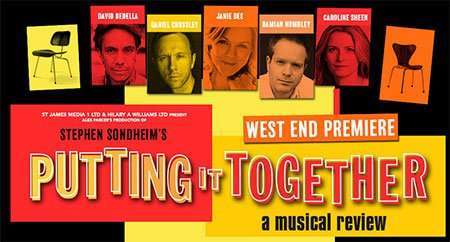 It is a long time since London had a Stephen Sondheim compilation show. Side by Side by Sondheim started it all off in 1976 when Cleo Laine and John Dankworth asked David Kernan to stage a charity concert at their theatre in Wavendon, The Stables. Ned Sherrin became involved as the narrator with Kernan, Millicent Martin and Julia McKenzie providing the singing. Producer Cameron Mackintosh saw the performance and took it to the Mermaid Theatre and then into the West End where it ran for several years. It went to Broadway, did a US tour, was revived in London at the Donmar Warehouse and also went to Australia. Sondheim has always been more appreciated in the UK than in the US.

Having received many requests to update Side by Side, Sondheim was persuaded by Mackintosh to compile a new show of his songs and he brought in McKenzie again. The result was Putting It Together. In 1992 it had a brief run in Oxford with Diana Rigg, Clive Carter, Claire Moore, Clarke Peters and Kit Hesketh-Harvey, directed by McKenzie who also staged the 1993 off-Broadway production at the Manhattan Theatre Club, with Julie Andrews. The show was seen in Los Angeles in 1998 and had a Broadway revival with Carol Burnett, George Hearn, John Barrowman, Ruthie Henshall and Bronson Pinchot. Putting It Together now finally receives its London premiere. Apart from a couple of dropped numbers, the show is as it was on Broadway, the best set of songs currently being performed in London and has a terrific cast and creativity. 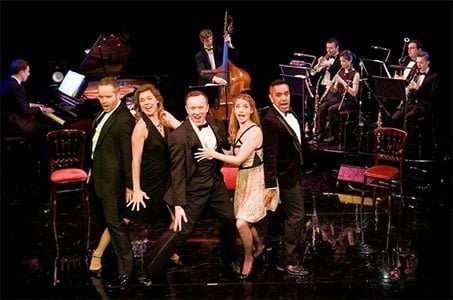 It is amazing how well Sondheim’s material works out of its original context. Putting It Together has a vague plot about two couples at a cocktail party where their relationships seem to be fairly rocky. The songs provide the differing moods on display, moving from contentment (‘Do I hear a waltz?’) to seduction (‘My husband the pig’), then onto revenge (‘Every day a little death’, both from A little night music) and infidelity (‘Everybody ought to have a maid’), contemplation (‘Pretty women’, Sweeney Todd), consummation (‘Bang!’), desperation (‘Country house’), self-pity (‘Unworthy of your love’, Assassins), separation (‘Could I leave you?’, Follies), to marriage (‘Marry me a little’, cut from Company), ‘Getting married today’ (retained in Company) and reconciliation (‘Old friends’, from Merrily we roll along).

It’s an amusing and sad journey through the lives of these embittered couples and their problems, but it’s made palatable by the songs’ delightful nature. The production fields a roster of superlative talents. Caroline Sheen plays a very dumb young wife whose only real attribute is that she is ‘Lovely’ but sadly has nothing upstairs. Janie Dee imbues each of her songs with great savagery as she tells of ‘My husband the pig’, or asks him ‘Could I leave you?’ – “Could I bury my rage / With a boy half your age? / In the grass / Bet your ass.” When trying to think of ways of keeping their marriage intact in ‘Country house’ they bicker over whether they should buy the place, or go abroad, or see a friendly shrink, get a St Bernard or adopt a child. Dee also does a splendid version of ‘The ladies who lunch’, very much in the spirit of Elaine Stritch’s merciless original. And Dee is never better than when she declares that she is not ‘Getting married’, a litany sung at breakneck speed detailing all the reasons why she cannot be wed. It’s a marvellous song and Dee attacks it with bravura. Her duet with Sheen (‘There’s always a woman’) almost becomes a duel to the death.

David Bedella and Damien Humbley have their moments, too, the former turning on the charm in ‘Hello little girl’ as he prepares a little seduction. Humbley is especially good in ‘Being alive’, that anthem of yearning for someone to have, to hold, to need and to know, someone who will make him alive and not alone. Daniel Crossley acts as a sort of host for the proceedings and proves to be a deft performer, light on his toes and as witty as anything. He opens with the ‘Invocation and instructions’ from The Frogs, telling the assembled audience how to behave during the show. He also does a fine version of ‘Buddy’s blues’, in which he sings three characters at once, seemingly effortlessly.

There are only a few numbers shared Side By Side By Sondheim and Putting It Together. If you liked the former, you’ll love the latter. Putting It Together is at the new St James Theatre for just three weeks but something tells me it has West End transfer written all over it. I hope so.