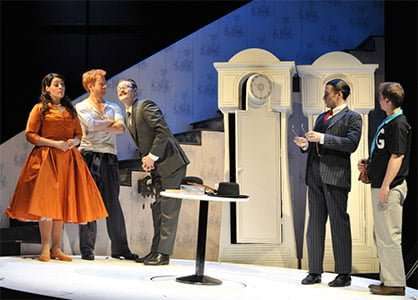 Under Michael Rosewell, the Royal College of Music opera department, which mounted a marvellous La Vie Parisienne earlier this year, was keeping the French flag flying in similarly assured presentations of Ravel. The fixed set of a giant open fob-watch for L’Heure espagnole was adapted for L’Enfant et les sortilèges, with the latter’s garden scene and its livestock represented by cogs and springs rather than natural elements.

James Bonas’s staging for L’Heure espagnole swept up vaudeville, Monsieur Hulot-style comedy and Whitehall farce with inventive wit as Concepción raced against time to manage her extra-marital affairs to her complete satisfaction, complemented by the surrealism of Ruari Murchison’s designs, which enhanced the sex-and-time obsessed ticks and whirring of Ravel’s music. Bonas strongly put across the point that the five singers are mostly at the beck and call of the orchestra, with the more overtly lyric tenor role of Gonsalve there mainly to send up operatic aspirations. 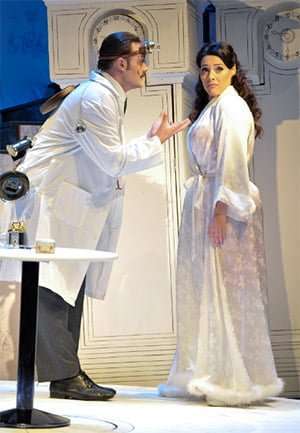 All five got the balance between acting and singing just right. The curvaceous Kezia Bienek’s Concepción was a voluptuous pragmatist to be reckoned with, her frustration as dalliance-time ticked by vividly realised by her bright, full soprano. Gyula Rab as Gonsalve, her non-starter of a poet-lover, showed off his fine lyric tenor in his florid effusions and acted the role with magnificent self-regard. As her other hopeless suitor, Don Inigo, Bradley Travis wasn’t remotely corpulent enough to get stuck inside one of the much-humped-up-and-down-stairs grandfather clocks, but his agile bass and comic timing hit the spot. With clocks hanging off his clothes, unsuspecting husband Torquemada was literally weighed down by time, and was played with fussy precision by Nick Pritchard, who had enough music for his elegant baritonal tenor to sink into. Amiro, the muleteer with the muscles who gets the girl, has some touching short soliloquies tucked away in all the declamation, and baritone Luke D. Williams caught Ramiro’s innocence stolen by prima urges with sly humour and easy, attractive singing.

All the hiding-in-clocks stuff worked like, er, clockwork, the singers’ French was clear, the text’s doubles entendre came thick and fast, and the orchestra sounded completely at home with Ravel’s Spanish-accented score.

Bonas turned up the sophistication for L’Enfant et les sortileges, with Ruari Murchison having a field day with the designs – the only misgiving being the mechanical garden scene imposing an unnecessary link with L’Heure espagnole. There were references all over the place – to expressionist cinema, shadow theatre, Magritte (in the chorus of bowler-hatted figures) – and the costumes for child-unfriendly chairs, arithmetic, numbers, tea-cup, shepherd and shepherdess from the ripped wallpaper and the tormented livestock were all fantastic and dreamlike, with Wayne Dowdeswell’s lighting providing plenty of dramatic effects.

With a large cast and even larger chorus and many short-sharp solos, the direction was fluid and unfussy, and among the accomplished soloists He Wu’s stratospherically high Princess, Nicholas Morton’s and Katie Coventry’s graphically feral cats and Maria Ostroukhova’s sonorous Mother stood out. Rose Setten’s light mezzo and boyish appearance set up the Child with some scorching tantrums and a cleverly drawn dawning awareness that extreme petulance and cruelty to animals might not be in his best interest. The orchestra relished all the influences Ravel poured into his almost over-melodious score and the various dance scenes were cunningly choreographed. This moral of a naughty boy’s come-uppance was completely enchanting.