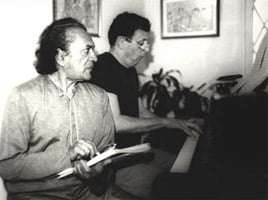 Before a note had been played for the capacity audience, Ravi Shankar’s appearance in the Royal Festival Hall’s auditorium elicited a warm round of applause. The great man, now ninety, sat in the very front row for this world premiere performance of a long considered work: his Symphony. It’s rare for an orchestral concert to generate quite such a sense of occasion but one might have been justified in considering the standing ovation at the concert’s end to be more a generous appreciation for this revered musician than, perhaps, for the excellence of this work.

On the podium, David Murphy demonstrated a concern for clarity and simplicity which rather worked against the first item on the programme, John Adams’s breakthrough work, Shaker Loops. It’s more than thirty years old now, but is still one of his most frequently performed works and, as Adams explained in his typically engaging programme note, was vital in establishing his musical voice. Originally conceived for string septet, the string orchestra version was given here. This expanded score allows greater contrasts and deeper colours, though these were traits that Murphy was slow to explore. The strings of the London Philharmonic, squeezed awkwardly across the Royal Festival Hall’s stage, began the first of the four connected movements at too great a volume, leaving little space to expand into. Little was made of the ‘loops’ of the title, with Murphy’s decidedly steady tempo and podium manner failing to generate the kind of mounting tension and expectation which is so important in Adams’s music. By the third movement, titled ‘Loops and verses’, the orchestra had found a greater dynamic range and the performance gained momentum. As the fourth and final shimmering movement slipped beautifully away, I was left wishing that Murphy and his orchestra could have found this frisson at the outset. 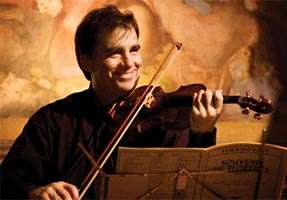 Philip Glass’s First Violin Concerto marked a departure for the hugely successful minimalist composer. It was the first of a continuing series of concertos and orchestral works and remains one of the most satisfying of Glass’s frustratingly uneven forays into concert music. The soloist for this performance, Robert McDuffie, knows Glass’s music well, having commissioned and premiered the composer’s Second Violin Concerto in December 2009. He gave the first European performance in April, also with the LPO, and is this summer touring the new work across America. It was a surprise, then, to hear McDuffie sounding so uncomfortable with the solo part of the First Concerto, which is a work he has recorded.

As in the performance of Shaker Loops, David Murphy strove for clarity and balance. The string chords which begin the concerto were free from vibrato and the harp was unusually clearly audible. Subdued brass-playing made this a restrained accompaniment. McDuffie’s playing was effortful and insecure. The rapid arpeggiated figures which make up much of the solo part seemed to tax him unduly and his accuracy suffered. Performers can try too hard to wring expression from Glass’s music and at times McDuffie pushed a little too far. The second movement was more successful. Here McDuffie found just the right balance between vibrato-led expression and a more reserved approach to Glass’s repetitive passacaglia structure, though his intonation at the top end of the E string was still alarmingly poor. Some unthinking applause disrupted the link with the final movement: McDuffie and Murphy were very clearly poised to continue smoothly but were foiled by clapping and ensuing chatter! McDuffie seemed more at ease with the rapid finale, though the heavier orchestration covered much of his solo part. There wasn’t much Murphy could do about that, and one suspects that this movement is inherently difficult to balance. This generally unsatisfying performance was more successful in the subdued conclusion, but the feeling remained that McDuffie seemed ultimately to have been inadequately prepared.

For Ravi Shankar’s Symphony, a reasonably large orchestra was joined by his daughter Anoushka, who played the sitar from a small platform at the front of the orchestra. Shankar has explored this combination before in three sitar concertos. His symphony is hugely enjoyable and full of unexpected drive and energy. As this four-movement piece progressed, however, it became clear that a concerto is what it really is. It may be set in the mould of a classical symphony (fast, slow, fast, fast), but in each movement an orchestral introduction built to the entry of the amplified sitar.

Each movement is based around a raga, the last two of which are Shankar’s own creations. Shankar makes better use of the orchestra here than in those concertos and he deploys it as a genuine ensemble, rather than as the collection of solo instruments it seemed in the earlier pieces. That said, the sitar is rarely integrated and for a long stretch in the last movement takes off on a virtuosic cadenza of its own. The amplified sitar was in this performance somewhat at odds with the orchestra, and in their nature the eastern and western instruments seem irreconcilable. With its overlapping textures, the sound of the sitar is one of many facets and the playing-style one of almost continuous ornamentation, while western classical instruments have largely evolved to exemplify the purity of the sustained sound. Shankar’s orchestral writing is best when he brings the sound of the western instruments closer to that of the sitar, for example as with the trombone glissandos in the Symphony’s first movement. But these instances are rare and what might be a complex ornamented line on the sitar is much less interesting when repeated by a section of violins.

This is, however, a satisfying work which doesn’t outstay its welcome at a not inconsiderable 45 minutes. Shankar’s way with his ragas is inventive and often exciting, and Anoushka’s virtuosity was in this performance a delight in itself. But the question remains as to why this was conceived in symphonic terms, and with all of the baggage that the term ‘symphony’ carries, I can’t help but wonder what Shankar might have achieved had he considered a more thoroughgoing dialogue of eastern and western instruments.