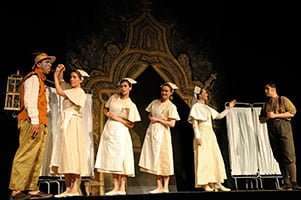 The Magic Flute is no stranger to the Curse of Konzept, but director Nicholas Heath’s imaginative staging cleverly reworks Mozart’s singspiel pantomime without diminishing its charm. He’s set it in a colonial hospital at the time of the height of the Raj, roughly Edwardian, and has dispensed with as much of the freemasonry as possible in favour of the hierarchic mystique of the medical world – a game of doctors and nurses for grown-ups. So Tamino is being treated for a snakebite, the Three Ladies are lascivious, crisply starched nurses, the Queen of the Night the even starchier hospital matron and Sarastro the head physician – oh for the days when hospitals still trembled beneath matron’s sensible shoes. It was a bit of a stretch to fold a (Western) bird-catcher into the mix, but otherwise Heath’s staging gently sends up all the mystic east enlightenment business efficiently and with humour. 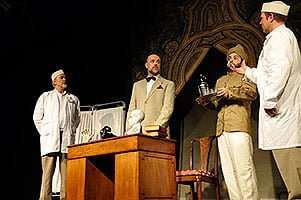 The single set of this touring production of an ornate Indian arch and some hospital screens that can be reversed to provide some exotic foliage didn’t sit that easily in the massive, decidedly Western nave of St Sepulchre’s, but it mattered less as the evening drew in. After the trials, which included Tamino and Pamina taking barium meals, the lovers, having achieved enlightenment, adopted Indian-style clothes. 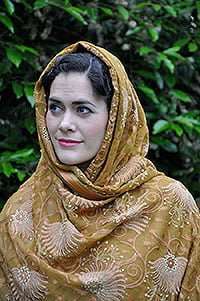 The Magic Flute is Regents Opera’s first production. The company grew out of Nicholas Heath’s Opera A La Carte, which has been in business for nearly 20 years, and Heath has assembled a strong cast. Ben Thapa’s chin-up Tamino was personable and attractively sung, with a particularly ingratiating ‘Dies Bildnis’ showing off his elegant tenor, and he was a sturdy foil to the excellent Papageno of Michael Dewis who really held the show together with his engaging singing. Norah King presented Pamina as a memsahib in the making, who yields to the lure of the Orient as her singing became more radiant; she has a lovely voice, used to tear-jerking effect in ‘Ich fuhl’s’. The red-lipped Three Ladies were a terrific ensemble act, with stylishly cut-glass accents. I was rather hoping that the matron Queen of the Night would turn out to be a Carry On-style gorgon, but any minor disappointment was annihilated by the thrilling voice and definitely non-gorgon presence of Sian Winstanley, who in her two arias delivered the goods in terms of range and pin-point clear coloratura.

Patrick Ardagh-Walter was a sonorous Sarastro, and managed to combine the inescapable reality that Sarastro is a bit of a bore with knowing humour. The furtive, pervy Monostatos of David de Winter was a particular delight and, again, very well sung. The church’s wallowy acoustic made all the voices sound even finer, although it didn’t do the words of Heath’s translation many favours. I caught the odd, anachronistic joke at the expense of the NHS, but much of it was lost. The reduced orchestra did without trumpets and trombones, and had a seductive chamber-music quality, very well played, with Susanna Stranders, the opera coach and accompanist making her conducting debut, working wonders with pace and ensemble. It was a special pleasure to hear this Flute in the Musicians’ Church, but I suspect it may work better and tighter in a smaller building.