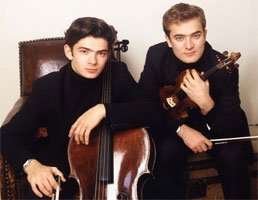 As Renaud and Gautier Capuçon continue their project to record Brahms’s complete chamber works with piano, their most recent release, with Antoine Tamestit and Nicholas Angelich, covers the Piano Quartets. It was therefore no surprise to find their performance of the G minor was extremely well drilled.

This was a heart-on-sleeve performance, full of silky tone and slick ensemble, but certainly not clinical or uninvolving. The richness with which the quartet played the Andante’s hymn-like subject may not have pleased all, but its fervent delivery extended to the snappy dotted rhythms of the counter-subject. The extended closing section affirms the home key in a drawn-out pedal note passage, and this was ideally pointed towards a vibrato-less final resolution, a real moment of rest.

The faster music found the ensemble impeccably unified, and, in the Intermezzo, elusive. The lightness of texture, coupled with Gautier’s insistently syncopated rhythms, threw the pulse into uncertainty – an ideal platform from which to grow the more affirmative trio. This too was light in texture, with a beautifully fluid ascent from Angelich’s right-hand.

The outer movements can, in the wrong performance, be weighted too heavily in favour of the piano, but while Angelich gave a forceful performance he was careful to allow the strings their own projection. The first movement had a real sense of stature, an indication of the large structure about to unfold, while the ‘gypsy’ finale was taken at a real lick, with crystal-clear right-hand octaves from the pianist as the three string players kept apace with rapid pizzicatos. Not that this was a showy performance for the sake of it, for the chosen tempo added to the thrill of the music and its unison finish.

In Mahler’s Piano Quartet movement the effect was an emotional opposite, this sombre and rather dark utterance given at a slow tempo. Angelich applied generous rubato to the opening statement – almost too much – while the string players were selective in their use of vibrato, avoiding sentimentality in the sixteen-year-old composer’s invention. Renaud found a real anguish in his solo towards the close, and if the work does rather insist on restating its two principal motifs, the climax points were forceful and naturally achieved. Again the sound was rich, but in a way wholly appropriate to the Romanticism of its musical language – not perhaps indicative of Mahler’s future output, but an ideal companion to the Brahms.