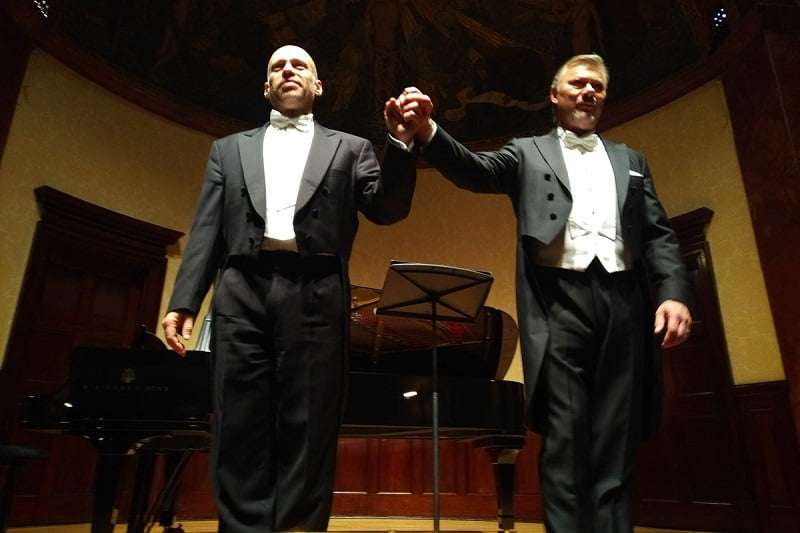 You wonder if singers you know first through Lieder will be as strong in opera (I’m thinking of Gerhaher), and, in the case of René Pape, whether the great opera bass-baritone of his generation will translate to the intimacy and exposure of the recital. Only half-joking, a bass-baritone once told me that, after opera, recitals were too much like hard work. Pape was last at Wigmore Hall in 2016 (his debut) in a programme of songs of faith and death, and here he expanded into love, wonder and a little humour. Pape has the gift of reeling you in with his focus and stillness, and gestures such as one warning finger (in the Mozart) or both arms expansively raised in just one of his Sibelius set were more or less it in terms of dramatic emphasis. It was all down to the authority and intensity of his singing that leaves you with the impression that his voice is inexhaustible, with colour, substance, imagination and nuance to spare from pitch-black to a quietness of exceptional delicacy.

You immediately got the measure of his modest but commanding stage presence in Mozart’s Masonic Cantata, ‘Die ihr des unermesslichen Welthalls Schöpfer ehrt’ K619 (You who honour the Creator of the infinite universe), to an ecstatic text about faith, brotherhood, joy and equality by Franz Heinrich Ziegenhagen, much in the same vein as Schiller’s Ode to Joy. Pape is a noted Sarastro, and this setting is very much Magic Flute territory, giving full range to his powers of declamation, and he shaded the music’s solemnity with easy tact. Pape’s uncalculated style of characterisation – often just a raised eyebrow or tilt of the head – seeped out of Three Poems by Michelangelo, which Hugo Wolf set just before he succumbed to syphilitic dementia. Michelangelo’s Renaissance musings on identity, memory and impermanence are brought bang up to date in three searing settings – the second, ‘All ends that has beginning’, sums up life in just over a minute – and the softer Pape’s voice became, so the songs’ dimensions grew.

Things lightened up in his selection of eight settings by Schubert, starting with a gracefully traced ‘Der Einsame’, the essence of contentment. He then moved on to the core of German romanticism in the magnificently controlled legato of ‘Im Abendrot’ before establishing the nobility of ‘An die Musik’ without a hint of grandstanding. ‘Heidenröslein’ was high on charm, and Pape was back on full power for a superb, theatrical account of the mighty ‘Prometheus’.

The Sibelius set of ten songs ranged from 1898 to 1915, most of them clustering round the turn of the century, the time of his first two Symphonies. Apart from two German originals (‘Im Feld ein Mädchen singt’, Opus 50/3, and ‘Der Wandrer und der Bach’, Opus 72/5), Shakespeare’s ‘Hey, ho, the wind and the rain’, Opus 60/2, and a Scottish hymn ‘Be still, my soul’ (both in English), Pape sung the other six in German translations from the original Swedish. There’s no lack of brooding Northern sweep to put against hints of Tchaikovsky, Wagner and Mahler, and Pape was in his dark element in the grand Wagnerian lines of ‘Der erste Kuss’. He then accentuated the expressionist ecstasy of ‘An den Abend’, and throughout was animated by strong flashes of insight and bardic drive, and he ended with ‘Be still, my soul’, to the tune of Finlandia.

Julien Salemkour (replacing Camillo Radicke, who had hurt his hand) was as effective in the spare desolation of Wolf’s piano-writing as he was in the more orchestral Sibelius settings, and he is a highly responsive Schubert player. The latter’s ‘Der Lindenbaum’ was their first encore, then Richard Strauss’s ‘Zueignung’ cast its magic rapture.