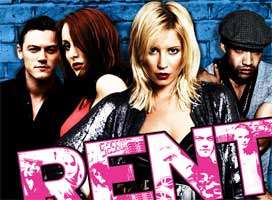 It was never that good a show in the first place. “Rent”, a modern take on Puccini’s “La bohème”, was conceived as long ago as 1989 by Jonathan Larson and Billy Aronson. A few years on it was presented by the New York Theatre Workshop in an initial reading, followed by a workshop production which sold out. A full production emerged in 1995 and transferred to Broadway where it has been running ever since. The London production was not a great success but now it’s back in a scaled-down version called “Rent Remixed”, although a better title would be “Rent: reductio ad absurdam”.

For some reason the US audience sees something in the show that appeals to them. Forget Puccini (although we get a blast of Musetta’s Waltz near the end) and his Romantic tale of love and poverty in 19th-century bohemian Paris. Instead, cut to 1990s’ New York with all its drugs problems, homelessness and AIDS. Eleven years ago “Rent” beat us over the head with its proselytising on those dying of AIDS. In “Rent Remixed” we get a running digital banner listing some of the famous and infamous victims of the disease, Freddy Mercury, Rock Hudson, Liberace, Kenny Everett, and others. Surely the point of AIDS and the resulting deaths is that it has nothing particularly to do with remembering the ‘celebrity’ victims, but everthing to do with the millions of ‘ordinary’ people who have succumbed to it. The characters in “Rent Remixed” are no longer the dregs of a drug-fuelled sub-stratum of US society but a smart set from the loft-living, Manhattan drug-fuelled social whirl of painters, photographers, musicians and performance artists, a group that is very difficult to care about.

The music is a collection of poppy rock numbers and serio-dramatic anthems that are supposed to make us feel good. The fact is that this must be the first show ever to let one leave the theatre in a state of total depression at how appalling musical theatre has become. Writer and composer Jonathan Larson died (not from AIDS) before the production opened on Broadway. A Foundation was created in his memory “to provide financial support and encouragement to a new generation of musical theatre composers, lyricists and bookwriters.” Let’s hope they come up with something more edifying than “Rent”.

William Baker’s remixed production presents ciphers instead of real characters, stereotypes that fit into no pattern at all: Mimi is dying of both AIDS and heroin addiction, her friend Roger is a musician of dubious ability, Mark is a photographer who is more posey than his subjects, and Angel is a screaming little queen, the like of which went out with Kenneth Williams and Larry Grayson. Still, he does have a lovely death on a stairway to heaven – ah! You can tell when these characters are acting as they walk slowly towards the front mouthing inanities very loudly and clutching their jackets tightly to their chests to signify pain and suffering.

Originally “Rent” had no stars; it was an ensemble piece. Here Denise Van Outen is given top billing as Maureen, the bisexual rabblerouser who is fighting for the rights of the homeless in beautiful uptown Manhattan. However, she doesn’t appear until the last minute of Act One, in time to take a bow. After the interval she does an embarrassing turn, shaking all her booty at the audience in a reckless attempt at creating pseudosexual foreplay with the customers. Leave it out, please!

All that said, however, it is quite possible that “Rent Remixed” may well become a success. It has attracted a young, noisy, non-theatregoing audience that whoops along at every conceivable opportunity and appears to be transfixed by every ghastly moment of this hideous show. The combined efforts of Old Compton Street habitues and the Denise Van Outen fan-club could well herald a palpable hit for “Rent Remixed”. And you wonder why I’m depressed?