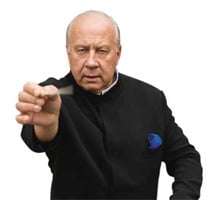 As part of the “Revealing Tchaikovsky” festival on the South Bank, Neeme Järvi and the London Philharmonic examined his legacy. The self-taught Rimsky-Korsakov, perhaps Russia’s most celebrated pedagogue, offered an appropriate point of comparison.

Sergei Taneyev (1856-1915) was arguably the most gifted of Tchaikovsky’s students, and his Fourth Symphony closed the concert in bracing fashion. Järvi has a long-held familiarity with the work, recording it for Chandos in 1990, but his interpretation appears to have gathered speed in the ensuing years.

There is much to admire in Taneyev’s composition, and with the London Philharmonic piecing together the dense contrapuntal workings each idea was properly projected, each melody savoured. In the case of the first movement’s slow tune violas and cellos were beautifully unified, shaping their melody over a lightly pulsing accompaniment. In drawing this out Järvi anticipated its affirmative return at the symphony’s close, by which time it had taken on an Elgarian nobility.

Taneyev frequently suffered from being known as “the Russian Brahms”, and it’s easy to sympathise with that, despite some striking similarities between this work and the older composer’s First Symphony. The thudding timpani striking an ominous note in the finale were a case in point, as was the Adagio and here inhabiting a similar soundworld to a Brahms intermezzo, its floated clarinet solo beautifully played by Robert Hill. Taneyev’s orchestral colouring distinguishes him apart from Brahms, however, and the brass section added a splendid bite to the call-to-arms of the first movement, aided by incisive ensemble.

Opening the concert was a colourful Suite from “Le coq d’or”, retaining its French title from its successful 1914 Paris premiere, under the direction of Diaghilev. Järvi played to the audience, some of whom thought the suite had finished a movement too early – the mysterious beginning of ‘Nuptials’ soon quashing that notion. Enjoyable, too, was the way in which the principal motif of ‘Tsar Dodon and the Battlefield’ was passed around the sections of the orchestra, alighting briefly at the celesta, while the feathery viola and cello melody of ‘Tsar Dodon at the Palace’ was a silky smooth rendition of his vision of the beautiful queen.

In such exotic company it was interesting to draw parallels with Mendelssohn as Tchaikovsky’s Violin Concerto unfolded, with comparatively economical orchestral accompaniment. Vadim Gluzman was a sensitive and enthusiastic soloist, though occasionally his intonation veered towards the sharp side. It was, however, an affectionately realised performance, reflective in the slow movement and vibrant in the fast music. Here Gluzman’s virtuosity was beyond question as the violin scampered forward, particularly in the finale, but equally notable was the lyricism of his performance, the violin gracefully singing Tchaikovsky’s legato themes. These two elements combined effectively in the first movement cadenza, around which the violinist was consciously pushing the tempo forward.

As an encore he gave the first movement, ‘Obsession’, from Ysaÿe’s Sonata for Solo Violin, Opus 27/Number 2. This short piece bursts with quotations from unaccompanied violin pieces by J. S. Bach, in its own way anticipating Schnittke – a composer rather further down the Russian-composer family tree.