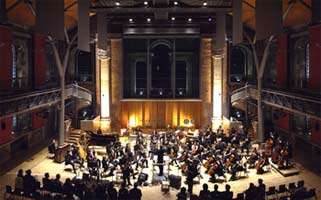 After an enterprising first season at LSO St Luke’s, the London Contemporary Orchestra then took on the premiere of Jonathan Cole’s distinctive brand of music-theatre that is burburbabbar za, and, now, gave the first of what will hopefully become regular performances at the Roundhouse – scene of many groundbreaking events in the 1960s and 1970s; presently re-establishing itself through such high-profile projects as the Electric Proms. Indeed, the programme had a breadth to remind one that icons as distinct as Pierre Boulez and Cornelius Cardew found this a congenial venue for their work.

With an auditorium somewhere between casino and bullring, together with overhead lighting and the once-obligatory mirror-ball, the Roundhouse is certainly an appropriate setting with which to attract younger audiences to music such as the LCO is (rightly) keen to champion. Two modern classics with two new works seemed a good way to proceed, and it was unfortunate that scheduling combined with last-minute holdups meant that the concert did not get going until towards 10 o’clock, with a finishing time around 15 minutes to midnight. Chalk Farm Road can rarely have been so full of punters bereft of transport home.

Of the new works, Shhoctavoski (2009) found Geir Jenssen – better known as Biosphere – feeding fragments from Shostakovich symphonies into notation software then rearranging them to form new music. As atmospheric and alluring as the outcome was on occasions (one would expect nothing less from a mainstay of ambient electronica), the piece as a whole failed to engage: motivic shards redolent of Scelsi extended with some effort over time and space, while the Roundhouse Experimental Choir contributed deft onomatopoeic touches, but these 14 minutes did seem a good deal longer.

Aged only 22, Shiva Feshareki has built up a notable CV and is evidently a composer with a perspective on both sides of whatever ‘divide’ may currently exist between classical and contemporary music. This was a first outing for TTKonzert for turntables, saxophone quartet and orchestra (2010). With its samples ranging from Stravinsky via Turnage and Bad Company (!) to Shocking Pinks, this was an ambitious attempt at cross-cultural fusion with the occasional startling synthesis. In which case, why opt for a three-movement format of (more or less) fast-slow-fast design in which each section tended to cancel out rather than build on the previous one, as well as necessitating lengthy turntable changes that similarly frittered away whatever intensity had been accrued. As a concept, Feshareki may well be onto something: in realization, however, this seemed no more than a marker.

In both these works Hugh Brunt conducted with a sure sense of where the music should be headed and what was needed to get it there. Hardly his fault, then, that the works performed without him at the helm proved far more vital in performance. Hopes that Steve Reich may have withdrawn his moratorium on the string orchestra version of Different Trains (1988) proved unfounded, but the original can seldom have sounded this engrossing since Kronos premiered it two decades ago. Impressive playing from the quartet of section leaders – allied to well-judged amplification and video projections that, by locking sound and vision into a reciprocal relationship, served much more than the alleged demands of youth culture – made this a performance to savour. Musically, too, Reich melds abstraction and polemic to a degree his subsequent works may have striven for but have largely failed to recapture.

The evening ended with seemingly the first UK performance of John Cage’s last work. Seventy-Four (2002) draws that number of players into a sonic happening more extemporized than intuitive but whose richness of timbre and density of texture are anything but random or arbitrary. Once again, the performance was of the conviction expected from musicians of this quality – suggesting the LCO could do worse than to search out further modern classics somehow overlooked by those supposedly in the know. Whatever else, this is an organisation that deserves to run and run.