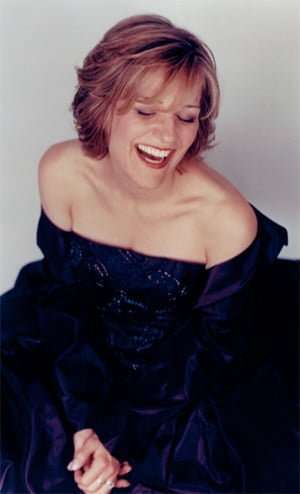 Karen Mason has a rich theatrical history, having appeared in Hairspray and Mamma Mia (originating the role of Tanya), and having understudied Glenn Close, Betty Buckley and Elaine Paige (“delicate flowers all”) in the Broadway version of Sunset Boulevard. She has a powerful voice that would reach to the back of any gallery, and superb musicianship, as demonstrated in her opening number, ‘Something’s coming’ (West Side Story), in which she takes some daringly off-centre liberties with the melody while always keeping in touch with her superb accompanist Mark Hummel.

As part of her engaging patter, she tells us she was born in St Louis (sound the ‘s’) and first became enraptured with the idea of performing when taken by her parents to the outdoor municipal theatre, The Muny, which had a seating capacity of 13,000. She conveys part of the awe she felt with a delicate version of Alan Menken and Tim Rice’s ‘A whole new world’, from Aladdin. One wonders if she gained her initial experience singing for such a multitude, for she certainly has formidable lung-power, but she employs it at the service of the material, ensuring that the belting rarely seems strident or gratuitous. Just once, on Kander and Ebb’s ‘All that jazz’, did the muscle seem to overwhelm the melody, but earlier she had performed a beautifully realised version of the same team’s ‘Coloured lights’ from The Rink.

The conviction that she lends to lyrics suggests that when Mason gets a chance to perform a role she is also a fine actress. She certainly has a wonderful sense of humour. Singing Jule Styne and Leo Robin’s paean to gold-digging, ‘Diamonds are a girl’s best friend’, she notes that “He’s your guy when stocks are high, but beware when they start to descend”, letting her voice plumb the depths as the statement ends – it’s a deviation from the original melody, but effective.

Mason also delights when in the Loewe & Lerner ballad from Brigadoon, ‘Almost like being in love’, she declares “Maybe the sun gave me the power, / But I could swim Loch Lomond and be home in half an hour”, and she sings the latter part of the line with a wonderfully exaggerated Scottish burr. Frank Loesser and Jimmy McHugh composed ‘Murder, he says’ seventy years ago as a showcase for the era’s “blonde bombshell”, Betty Hutton, but Mason gives the ditty (the lament of a girl whose hipster lover converses with her in rowdy slang terms instead of romantic nothings) a fresh approach that makes it as amusing as ever.

Her dramatic weight is evident when she becomes Norma Desmond in Sunset Boulevard, delivering a frighteningly manic love-song to her bygone days of stardom, ‘As if we never said goodbye’, and she effectively blends two hits from the film Les Parapluies de Cherbourg, ‘Watch what happens’ and ‘I will wait for you’ into a passionate declaration of abiding devotion. Equally touching is ‘Right here, right now’ co-written by her husband, Paul Rolnick, as an adoring tribute to Karen and which gives her show its title. I can imagine London having a love-affair with Karen Mason and her remarkable talent.