Michael Berkeley* & Sir Lennox Berkeley**
Nettles*; Five Housman Songs, Op.14/3** – II: He would not stay for me; IV: Look not in my eyes; III: Because I liked you better It has been some years since I’ve heard Robin Tritschler, and memories of an elegant, attractive tenor were rapidly updated to take in a voice and style impressively more layered, substantial, open to suggestion and earthed. He had devised a programme on the theme of related composers – brothers, sisters, father and son, father and daughter, husband and wife. No mother and daughter though (Elizabeth Maconchy and Nicola LeFanu, perhaps?), but as it stood the recital was already long enough.

Tritschler had a lot to compete with – Wimbledon, World Cup and sizzling heat – but he didn’t hold back on well-served, back-of-the-net communication and involvement. Joseph Haydn’s ‘She never told her love’ (Shakespeare, one of the composer’s English Songs) set the bar high for Tritschler’s command of hushed stillness, and the long introduction heralded the high quality of Jonathan Ware’s role at the piano. In contrast, Haydn’s younger brother Michael (by five years), in Tritschler’s nonchalant take on ‘Die Vergänglichkeit aller Dinge’ (The ephemerality of all things), came disarmingly close to the quixotic and romantic spirit of Hugo Wolf.

The centre of Tritschler’s voice has an unimpeded clarity and depth that made Clara Schumann’s ‘Ich stand in dunkeln Träumen’ (I stand in dark dreams) glow in shadows as the singer gathered up Heine’s genius for pathos and intimacy, blown away by husband Robert’s setting of also-Heine’s ‘Der arme Peter’ (Poor Peter), a narrative about the lad who doesn’t get the gal and might just as well die, a very compressed Winterreise, sung with a finely judged sense of confidentiality and a lurking hint of Irish craic. You subliminally absorbed the similarity of idiom of the Schumanns, but there was a marked character to Fanny Mendelssohn’s nervy ‘Das Heimweh’ (Homesickness), intensified by the pressured edge Tritschler deploys so well. To go with the brilliant word-painting in Felix’s Hexenlied (Witches’ Song; Hölty), Ware was right up to the mark in the gripping piano part. 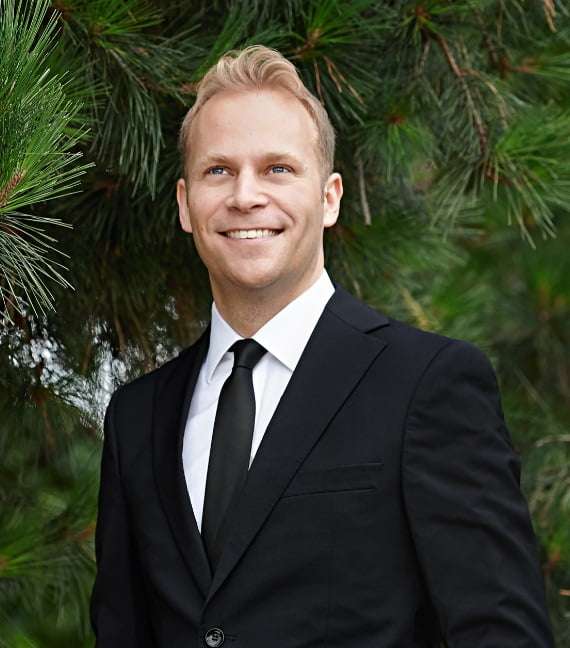 There had been many instances of the impeccable delicacy of Tritschler’s high chest voice, which came into its own in the haunting evanescence of two mélodies by the short-lived Lili Boulanger, to which Tritschler added barely perceptible notes of wonder and eroticism, along with his exquisitely natural French, the ensemble giving rise to perfect-world thoughts about Tritschler and Pelléas – his voice has that irresistible tenor-baritone ambiguity that makes folk go weak at the knees.

Following the interval, Tritschler flirted with the spectral longing and despair that flickers elusively in Berkeley father-and-son A. E. Housman settings. Michael’s ‘Nettles’, in which Tritschler pitched the book-ending vocalise into the piano to haunting effect, came across with lacerating honesty, and Tritschler became even more remote in superbly imagined accounts of three of Sir Lennox’s Five Housman Songs, suspending his voice over the frozen abyss of ‘Because I liked you better’ like a windless sail. His soft Irish burr eased us into the slippery imagery of Imogen Holst’s ‘Weathers’ (in which Tritschler had a memory lapse and started again) and it enhanced Thomas Hardy’s neatly turned irony in Gustav Holst’s ‘The Sergeant’s Song’.

This was a big recital, and the two artists were firing on all cylinders for a compelling and expansive performance of Britten’s Seven Sonnets of Michelangelo, which thrived on the bel canto virility of Tritschler’s sound. Everything fell into place, the balance between vocals and piano, the sweet spots in his voice that work a devastating magic, and the imaginative bravura that carries all before it. Ware, outstanding throughout, surpassed himself, as much therapist and conniver as accompanist. Their encore, ‘Twins’ by Michael Head, briefly touched on yet another sibling permutation.