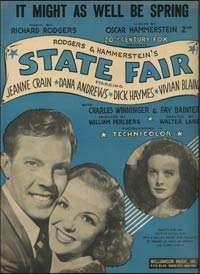 Although many of their successful Broadway musicals were eventually filmed, Rodgers & Hammerstein wrote only one show specifically for the cinema. Like “Oklahoma!” and “Carousel”, “State Fair” had a thoroughly American setting. The state fair in the US is something of an institution, where originally everybody congregated once a year for livestock competitions, local produce exhibits such as pickles and jams, cakes and other baked goods and handicrafts. Later on, carnival aspects were added to include amusements, rides, games and tests of strength.

In 1932 Phil Stong wrote a novel, “State Fair”, about a farming family in Iowa, which became a best-seller and led to the first film version a year later starring Will Rogers, Janet Gaynor, Lew Ayres and Sally Eilers. In 1945 Rodgers & Hammerstein decided to remake it as a musical film. It starred Dana Andrews, Jeanne Crain, Dick Haymes and Vivian Blaine. A charming, colourful and popular film coming just after the war, it pleased American audiences in the way that “Meet Me in St Louis” had a couple of years earlier. It won the Academy Award for Best Song for ‘It Might As Well Be Spring’, one of Rodgers & Hammerstein’s most enduring hits and their only Oscar. In 1962 20th Century Fox decided to re-make the film with singers popular at the time – Pat Boone and Bobby Darin, plus Ann-Margret, Pamela Tiffin and Alice Faye. Oscar Hammerstein had died in 1960, so Richard Rodgers wrote five new songs for the new movie, which was not a success.

In 1995 the original film musical was turned into a stage show by James Hammerstein, son of Oscar. As there were only five songs in the 1945 film, further ones were added that had been featured in or cut from other Rodgers & Hammerstein shows (Richard Rodgers had died in 1979). It included numbers from “Allegro”, “Pipe Dream”, “Oklahoma!”, “Me and Juliet”, plus a number from the 1962 re-make. The show went on a lengthy US tour starting out at the Iowa fair in Des Moines. When it came to Broadway with Donna McKechnie, Andrea McArdle, John Davidson and Kathryn Crosby in 1996 it ran for only just over 100 performances. An abortive attempt at a television series based on “State Fair” got no further than the pilot show (but it is available on the DVD of the musical film). 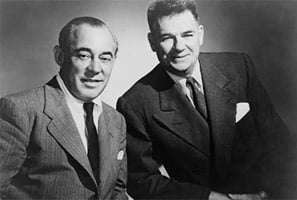 Director Thom Southerland has found a way of presenting classic American musicals in small-scale venues. He has already staged “Annie Get Your Gun”, “The Pajama Game”, “Mack and Mabel”, “Call Me Madam” and “Oklahoma!” as studio productions and they have all been successful. He also managed to get the European premiere of “The Unsinkable Molly Brown” off the ground at the Landor, Clapham, and now presents the European premiere of “State Fair” at the Finborough Theatre in Earls Court. Southerland explains his methods: “I have stripped these shows of their scenic façade and made their narrative and music the stars of the show. “State Fair”, although often seen in American media, has taken some sixty years to be staged in the UK. It is the story of the Frake children raised on a farm, growing up in a changing world. Such a story may appear to be from bygone times and a lifestyle far removed from our own. However, it is this very distance of time and place combined with their enchanting melodies and story, which create a beautiful, heartfelt drama, whose themes have proved never to have dated.”

Southerland could hardly have found a smaller space than the Finborough but his staging conjures up the warmth, the fun and the excitement of the original, the epitome of Americana, without it ever seeming short-changed. The Frake family is getting ready for the annual fair in Iowa. Mother (Melissa) is making pickles and mincemeat, trying to beat her neighbour in the competition, while Father (Abel) is hoping his prize boar will win best breed. Their son Wayne is practising his hoopla skills to get one over on the crooked side-show barker, and daughter Margy is mooning around trying not to accept a marriage proposal from school chum Harry who she has known since they were twelve. Her song is ‘It Might As Well Be Spring’ in which she contemplates her desperate situation. She goes to the fair with Wayne but once there they decide they would be better off on their own. They then both meet people to whom they take a shine; Margy meets a reporter Pat Gilbert, and Wayne meets Emily Arden, a singer. But there’s many a slip…

The show is a mixture of comedy and romance, with the prize-giving rituals providing much of the comedy and the pursuit of happiness the romantic element. The whole piece is a song and dance show and, although some of dances have had to be curtailed on account of space limitations, the company copes with some nifty footwork from choreographer Sally Brooks. The other original songs, ‘Our State Fair’, ‘That’s for Me’, ‘Isn’t It Kinda Fun?’ and ‘It’s a Grand Night for Singing’ come across well. Of the additional songs ‘More Than Just a Friend’ is a lullaby to a sick pig. ‘Boys and Girls Like You and Me’ fits well, even though it was cut from “Oklahoma!” and has sometimes been used in Rodgers & Hammerstein’s television version of “Cinderella”. If the second half seems a little truncated it’s because Emily’s number ‘That’s the Way It Happens’ was originally a dance number for Donna McKechnie. And ‘The Man I Used to Be’ (from “Pipe Dream”) is omitted.

Laura Main is sympathetic as Margy, suitably frail and dreamy, while her opposite number Emily Arden is more worldly wise. Sarah Waddell meets the challenge (she took over at this performance from Kellie Shirley) and is anything but dreamy in her handling of poor love-struck Wayne. Susan Travers and Siôn Lloyd work well together as Ma and Pa Frake and there is good work from David Botham as Pat Gilbert. Anthony Wise contributes some nice cameos including Judge Heppenstahl who gets drunk on alcoholic mincemeat. Full marks and moonshine all round to Thom Southerland and his talented company of players for another triumph of content over space.