I don’t think anyone would describe either of ROH2/Linbury Theatre’s double-bill of “OperaShots” as particularly innovative or challenging – indeed, both are blessed with feisty accessibility. The respective composers, Stewart Copeland and Anne Dudley, both have a firm footing in film music – Copeland, founder and ex-drummer of The Police and, now approaching 60, seemingly not a victim of Rock-world excesses, has a prodigious amount of Rock and Classical work under his belt; and Dudley has supplied memorable soundtracks for “The Full Monty” and “Black Book”. 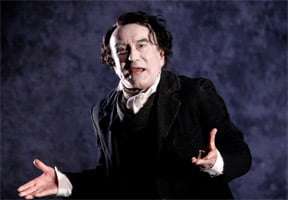 “The Tell-Tale Heart”, a half-hour version of Edgar Allan Poe’s horror story, in which the hero (here called Edgar) carefully plans to murder a rich old man (Alan), does the deed, then goes mad with the guilt that propels him into revealing his terrible crime. Copeland clearly relishes the lip-smacking melodrama that is a major element in Poe’s output, and has honoured the tone of the narrative at the same time as sending it up in a way that Vincent Price would have appreciated – a rich mix of Hammer and Rocky, grotesque Grand Guignol and, for those lucky enough to have caught it, the gleeful extravagances of “Shockheaded Peter”. Copeland’s pulsing score for strings, piano and percussion did the job in terms of mood and mounting hysteria, and is tightly written apart from the slightly superfluous roles for two neighbours (except that they injected female voices into an otherwise-male cast). Richard Suart, presented as a near relation of Max Wall, did not disappoint as he went deliriously over-the-top as narrator and protagonist; and Richard Strivens as the ‘other’ Edgar was very effective. Robert Ziegler gave the music an infectious forward momentum, there was some excellently observed movement and lots of spooky shadow-play, and the video graphics created finely obsessive images of the old man’s staring eye that tips Edgar over the edge – creepily atmospheric and rather made the show. It was a pleasure to see, but whether one will have the chance to do so again – that is the question. Anyway, it’s another notch on the already well-notched staff of Copeland achievement. 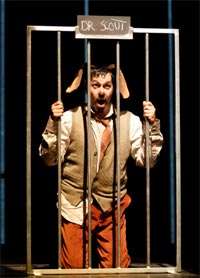 Anne Dudley’s “The Doctor’s Tale” is bigger in every respect – at an hour twice as long, with a larger cast and an ensemble including wind instruments and a harp. The doctor in question is a dog, Scout, whose treatment for all ills is mutual affection twenty-seven times a day and which earns him besotted patients. The humans’ tireless anthropomorphism and projection of themselves onto animals, dogs in particular, is skilfully done, layered and witty. The opening trio of patients praising their physician set the level for Dudley’s eclectic and quick-paced score, and the short scenes detailing Scout’s canine fall from grace, his being put down and, in the manner of Powell & Pressburger’s “A Matter of Life and Death”, being sent back from Heaven came thick and fast, with bracing variety. For fans of television’s “Family Guy”, like Brian the family dog, Dr Scout exerts a similar control and says those things mere mortals wish they could say – and, of course, he delivers the ultimate in unconditional love. Darren Abrahams was on fantastic form as Scout, getting the dog/human balance just right, and the other seven singers provided canines, patients, dogs’-home authoritarians and, particularly memorable, angels. Soutra Gilmour’s designs, both here and in the Copeland, are deft and to the point; what I heard of Terry ‘Monty Python’ Jones’s libretto (no surtitles) was sharp and funny, and Tim Murray and the CHROMA musicians helped the singers and music fizz with energy.