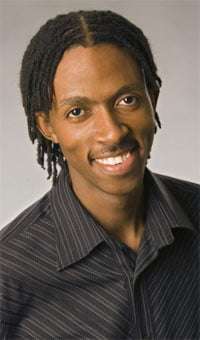 The twelfth season of Rosenblatt Recitals was marked by the accession of the first black South African singer to its roll of honour. Vuyani Mlinde epitomises some of the musical developments in that country in recent times. A sizeable number of the black singers who are now emerging to claim places on European and North American operatic stages have a background of being born and reared in the Apartheid regime’s infamous townships with their natural inclination to sing being fostered in the community choirs which abounded in the black areas. The democratisation of South Africa in 1994 released a flood of latent talent which continues to this day. Mlinde’s first musical experience was singing in his high-school choir. His subsequent journey has brought him to the Royal College of Music, the final of the prestigious Neue Stimmen competition, the Jette Parker Young Artists Scheme at Covent Garden and latterly to Frankfurt Opera. There is no doubt that he possesses a resplendent voice with a wide range extending in both directions, while stage performances have given evidence of natural theatrical gifts. Arguably the contents of his programme at St John’s were a rather obvious portfolio of his work but his strengths were well represented.

Mlinde began well with Mozart. Figaro’s defiance of his master was crisply articulated in the recitative. The dance metaphor of the aria had its incisive rhythms rather perversely smoothed out but the idea returned at the conclusion as a quietly veiled threat, portending a closely fought battle of wits between two intelligent and cunning adversaries. His Leporello played cat-and-mouse with the invisible, tormented Donna Elvira, the tone colour repeatedly changing as each varied group of conquests was conjured up. There was a minor glitch at “E’ la grande maestosa” but the voice opened out impressively in the expansive phrase before the nod-and-wink ending. The singer showed the right intentions in the eloquent concert aria which Mozart wrote to a text by Metastasio in which the treacherous Sebaste is tortured by remorse for his plotting against his king Xerxes and the heroic Temistocle. This is a masterpiece that should be heard more frequently; nowhere else does Mozart enrich the text by blurring the distinction so daringly between recitative and aria, while providing such opportunities for a master bass singer. Mlinde may not be that yet but he certainly has the range, especially the low notes, and his combination of vocal spectacle and gravitas suggested that he has identified the right style in this music. The resonance of his sound reminded me of Ruggero Raimondi and the range of Thomas Quasthoff. He will offer a more complete account when he no longer has to rely on the score as he did here. Ingrid Surgenor supported the voice admirably with her account of the dynamic, constantly evolving restlessness of her parallel part. Tchaikovsky was well served by King René’s arioso from his final opera, Iolanta, which would be heard more often were it not an awkward length and requiring a companion piece. The repeated surging phrases of the king’s prayer were ideally suited to the voice.

The songs programmed were rather disappointingly from the popular drawer. Mlinde demonstrated a decent command of German in the Goethe text which he chose for Tchaikovsky’s Mignon song but offered no great insight into this hackneyed piece. Respighi’s Nebbie was sung authentically, with Surgenor to the fore; under her fingers the misty atmosphere and shivering cold of the landscape depicted in Respighi’s setting came vividly to life. However, Tosti’s L’ultima canzone was, as far as style goes, well wide of the mark. The sluggish and heavy tempo chosen was quite misguided for the swirling, mercurial introductory bars, setting an unsuitable mood of melancholy for the voice to take up when it should be lightly dreaming. Foglia di rosa almost came to a standstill. The final phrases in which the poet calls on his old flame to remember their past kisses, were robbed of their beauty; in addition, the nostalgic sighs were rough, the final hum even unpleasant. It was a surprise to see Musica proïbita programmed by a voice of this depth and Mlinde did nothing to deter me from believing that Gastaldon’s song should remain exclusively the preserve of tenors.

Two Verdi arias either side of the interval and a third at the end of the evening laid out Mlinde’s claim to dramatic bass roles in Italian opera, without suggesting that he is yet ready for such duties. A mannerism which had been evident as early as the Don Giovanni aria was quite damaging here, the tendency to shorten the last syllable of a line of poetry and thereby break the continuity of a musical phrase. The musical line in all three Verdi arias suffered from this. The Ernani piece also showed signs of the singer’s intonation coming under pressure, along with a slight decline in vocal quality towards the end of Silva’s aria and an uneven cadenza. The words of Silva’s cabaletta were printed in the programme. Did Mlinde decide on the spur of the moment to omit the piece? One sometimes could not avoid the conclusion that he was concerned more about targeting particular, often climactic notes rather than bringing out the structure of the music. The top E in the coda of Banquo’s aria rang out thrillingly but he had ducked the same note a few bars earlier, like a sportsman saving himself for the final. The single encore was Fischer’s drinking-song Im tiefen Keller.

Ingrid Surgenor was a tower of strength throughout. Some pianists are not comfortable accompanying operatic music but her background as an operatic coach bore fruit for the partnership throughout that part of the programme. We should hear more of this artist, who was for nearly twenty years official accompanist at BBC Cardiff Singer of the World. She returns to St John’s with Marius Brenciu in September to inaugurate the next season of Rosenblatt Recitals.