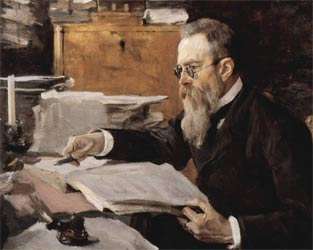 Marfa is betrothed to Lykov but desired by the lecherous Gryaznoy. Tsar Ivan is seeking a bride and chooses Marfa, who becomes ill through others’ actions. Gryaznoy accuses Lykov, who is executed. Marfa goes mad, and Gryaznoy confesses that he poisoned her. Lyubasha, fearing that Gryaznoy has forsaken her for Marfa, uses poison obtained from the sorcerer Bomeliy, from whom Gryaznoy procured a love-potion for Marfa, which Lyubasha exchanges, causing Marfa’s madness.

The Rostov Opera brought a delightfully old-fashioned production, with attractive, colourful costumes but without the concepts of some self-regarding, composer-violating director. Rimsky’s rich score was played with vigour, which does not mean roughness, by the orchestra, from the admirable overture through to the end of the intense fourth and final act. Alexei Shakuro led a gripping performance, with singing which was generally very accomplished.

The baritone Peter Makarov gave a compelling portrayal of Gryaznoy: a vivid presentation of treachery and envy. his voice, a first-class instrument, was rich and ample, freely produced and with a ringing top. I wondered why he was not with a more prestigious Russian company. Someone suggested to me that Makarov might make a wonderful Macbeth. Shall we, though, ever see him in London again?

It would have been a successful evening for me for Makarov alone, but he was not the only one to win plaudits. In the title-role, Natalia Dmitrievskaya was a winning performer, whether showing joy in Lykov’s company or Marfa’s mental disintegration in Act Four, in which she sang her aria with lyricism and well focused tone. She, like Makarov, is someone I should like to hear again.

Nadezhda Krivusha’s mezzo, though somewhat covered, was velvety smooth. She was very touching in the unaccompanied song in Act One. Lykov’s role is not huge, and at the première in 1899 it was even shorter. The aria ‘The clouds are passing’ was added later. It was nicely phrased in Alexander Leichenkov’s clear voice.

There is something special about hearing Russians in Russian opera, be it the chorus, here small but effective, or in such solo voices as that of Boris Gusev, one of those dark-toned basses that one loves to hear. Elena Kosolapova, as Marfa’s mother, had the wide vibrato that British critics condemned 50 years ago: the antithesis of those firm basses, but she played her part well enough if subtlety is no compulsory. Others made worthy contributions.

The Cadogan Hall stage was extended, but even then there was little space so one can imagine more grandeur in an opera house. Nevertheless, this performance gave much to enjoy, as, to judge by comments overheard, it did to many others.