Stravinsky
The Rake’s Progress – A Fable to a libretto by W. H. Auden & Chester Kallman after William Hogarth 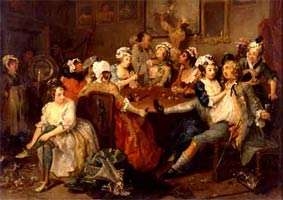 There was a lot of good talent on show: the singers were, for the most part, more than capable of exploring Stravinsky’s music; the set, and the general concept of the staging, displayed originality of thought and approach; and the orchestra carried the drama convincingly. However, when considering the whole, the evening was disappointing, due to a lack of cohesion between these three aspects.

The staging itself was, perhaps, the most interesting. The general idea was gambling, with playing-cards, and their imagery, cropping up all over the place. Of course, everything in Tom Rakewell’s life is a gamble. He does not want the security provided by Anne Trulove but, instead, he wants to live life to the full. His disastrous investment in the machine that will cure world famine, and his marriage to the bearded lady, Baba, condemn him to an asylum and, ultimately, suicide.

It is all very well having such a design-concept as life being a gamble but what did not work here was any sense of a link between the different scenes. And, placing the interval between Scenes 2 and 3 of Act Three did not help for continuity, especially given that the transition from the Street to where Anne finds Tom and is introduced to Baba is linked closely to the scene from Tom’s house, where Baba tells us about her life.

The required sordidness of the opera’s Brothel and, to some extent, the Asylum, was absent, being too clinical. The scenes that depended on crowd-scenes were quite good, offering plenty of scope for fun costume-designs. So the Street scene had many weird and wonderful London characters (comic policemen and Chelsea Pensioners) and the auction had a very busy feel to it. 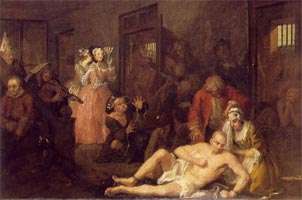 Most of the singing was very good, and, being in English, it was pleasing that diction was clear – as it is vital to one’s appreciation of the opera. The exception was Idda Falk Winland, whose singing I could not comprehend at all. As Tom Rakewell, Ben Johnson played the character as a lost man in a big city at the expense of him actually wanting to explore his reckless side. Adopting a stand-and-deliver approach Johnson sang his Act One aria “Since it is not by merit” without the defiance to conformity that is required. Hitting the notes was fine but acting them seemed beyond him. No doubt, he will concentrate on this more when the voice is instinctive. Rakewell’s character simply moved through the different scenes without the sense of descent to insanity, which was a fault of the staging. He changed his clothes but was always smartly dressed!

The most successful of the major characters was the mischievous Nick Shadow, who pulls the strings of Rakewell. James Oldfield is a tall and overbearing personality but with the cheeky sparkle in his eye – wonderful stuff and this found ideal realisation in his aria that seduces Tom to throw caution to the wind and marry Baba, the bearded lady. His movements and his hand over the shoulder of Tom expressed the part very well. It was good that Oldfield’s powerful bass-baritone voice thrust through the orchestration, too.Of the smaller roles, Alistair Digges, as the auctioneer, had a lot of fun and commanded the attention of all. So, too, did the brothel owner, Mother Goose. But, the pervading theme for the rest was good singing but poor characterisation. The good singing was impressive because Stravinsky’s vocal lines are difficult. But where ensemble-singing was called for there was not the sense of conversation or a natural compliance between voices – the Act Two trio “Could it then have been known?” did not explore the sorrows of the three characters (Anne, Rakewell and Baba) but, rather, simply stated them.

The orchestra was far too loud. This is a small theatre and, given the music’s neo-classical nods, it really should have been much quieter throughout if the singing was not to be forced, too. The music is rather sprightly, even in the menacing graveyard scene.

This is a challenging work from which the participants will surely benefit. It is also enjoyable and so well worth going to see.