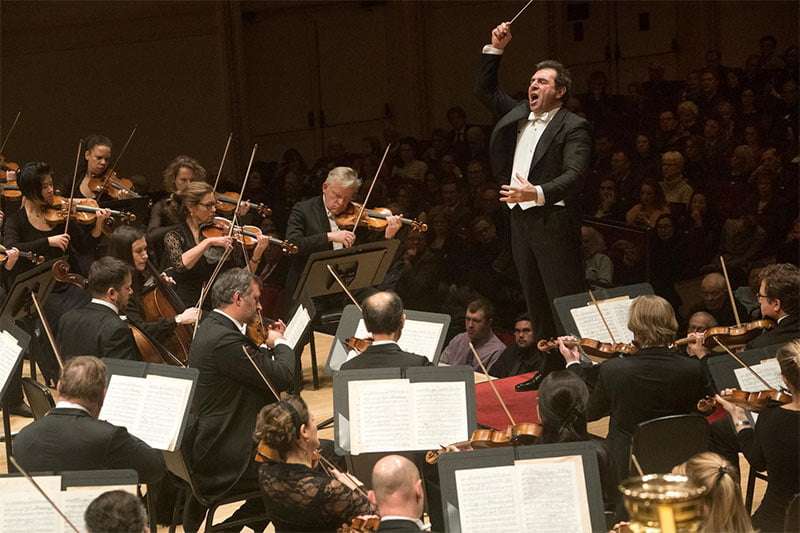 Few composers have idolized another one as much as Bruckner did Wagner; he was immersed in Wagner’s art, applying it to symphonic form with dedication but without losing stylistic individuality. Comparing the final works of these two creators provides ample evidence of how much Bruckner owed to Wagner’s melodic and harmonic gifts; the spiritual nature of Bruckner’s Ninth Symphony seems to have its roots in Parsifal, described by Wagner as a Bühnenweihfestspiel, a Sacred Festival Play.

The Royal Concertgebouw Orchestra has a long association with the music of Bruckner and Wagner. Its pristine sonic quality, warm, luminous sheen and rounded brass tones are perfectly attuned to them. After Willem Mengelberg left the orchestra as its conductor, the RCO acquired a reputation for conservatism, eschewing the overpowering and overly dramatic for a more temperate approach that concentrated on structural cohesion and emphasized the orchestra’s radiant, glowing timbre. Daniele Gatti, in his second year as the RCO’s chief, has had much experience with Parsifal, which he conducted at Bayreuth each season from 2008 to 2011, and at the Met in 2013, but little with Bruckner. He took a spacious approach to both works, almost as if they are cut from the same cloth.

Instead of conjoining the ‘Good Friday Music’ to the Act One Prelude, Gatti opted for that to Act Three, which concentrates on Kundry who has condemned Parsifal to wander in search of the domain of the Holy Grail. Gatti lingered over the opening passage in which soft, sleepy strings are bathed in an ethereal glow. A sudden forceful shudder in the cellos tried but fails to stir them. Throughout the Prelude Gatti maintained a broad, steady pace while eliciting the spiritual nature of this music with sensitive expression. The Prelude merged naturally into ‘Good Friday’, opening with majestic brass and continuing with extraordinarily beautifully string- and woodwind-playing. The music floated gently as if on a billowy cloud. Although his overall approach was straightforward, Gatti infused subtle nuances.

Gatti’s pacing in Bruckner 9 was broad but it never loosened the linear thread. Long crescendos into climaxes – a feature of Bruckner’s music – were steady but not overdrawn. Brass chorales were monumental but not ear-shattering, comporting with Gatti’s grasp of the overall structure. Lyrical phrases were imbued with a gentle fluidity that was enhanced by the violins’ glowing sound. Woodwind passages had a gleaming shine that contrasted perfectly with the strings’ mellow tones. Yet Gatti generated much dramatic power when it counted most, such as during the build-up to the close of the first movement, following which Gatti began the Scherzo without a moment’s hesitation. Its riveting intensity, timpani pounding out the driving rhythms, contrasts markedly with the frisky, light-hearted character of its Mendelssohnian Trio. As Bruckner’s last musical testament (he left the Finale unfinished), the Adagio’s opening theme resembles strongly the Grail motif from Parsifal, and enjoyed the interpretative and playing qualities that had preceded it. In a word the performance was sublime! Hopefully, we can look forward to more Bruckner (and Wagner) from Gatti and the RCO.