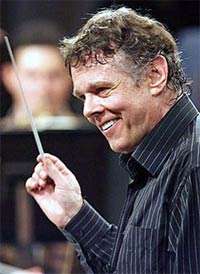 Mariss Jansons and the Royal Concertgebouw Orchestra displayed their many strengths in this the second of three concerts at Carnegie Hall and began with Otto Ketting’s De aankomst, for small orchestra. Holland has been a hotbed of ‘minimalist’ music; Ketting’s contemporaries Simeon ten Holt and Louis Andriessen have made particularly significant contributions to this family of repertoire. The opening and closing of De aankomst (The Arrival) is reminiscent of the music being written by John Adams (particularly Shaker Loops) and Steve Reich in the late 1970s and 1980s, with its undulating, restless repetitive string figures which begin the rhythmic ostinato that drives the work. Toward the middle, as strings forcefully play a barrage of sixteenth notes, the harmonies shift from diatonic to something close to middle-period Stravinsky. The work culminates with simple and chromatic chords in strings and wind sections overlaying each other, multiple tonalities appearing and departing until ‘arriving’ at a final, satisfying sustained note. 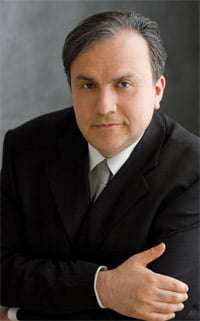 Yefim Bronfman and Jansons took an almost symphonic approach to the Prokofiev’s Piano Concerto No.3. There was a copious Russian character to the music-making; in fact, the Concertgebouw’s strings did a startling job of producing a full, penetrating sound more than reminiscent of being ‘Russian’. The first theme was played with smooth elegance, the second coming as startling contrast: Jansons eliciting raucous coloration from the orchestra, Bronfman dispatching big and penetrating but never clangy or pounded-out chords from the Steinway D. The climax that leads into the first movement’s development evoked an aural suggestion of the film music Prokofiev would compose in coming decades, and the final coda’s crescendo was thrilling – including a startling one from the brass that rose above the other instruments without overpowering them.

Bronfman’s control over balances and dynamics was impressive, especially in passages where his liberal use of the sustaining pedal never overrode the music’s melodic beauty and clarity, particularly in the second movement Theme and Variations. The hard-driven Variation in 6/8 was particularly striking, with Bronfman’s ominous marcato underpinned by an almost percussive cello section, yielding a rich sound balancing warmth and gruffness without the near-grotesque coloration this particular section risks taking on. In the finale Bronfman and Jansons played down the acerbic and emphasized the playful, the coda less emphatic of accentuated rhythm and more on the layer-by-layer build-up to the final C major chords.

Bronfman then dispatched a thundering, impetuous rendering of Chopin’s ‘Revolutionary’ Study (the last of the Opus 10 set), with an unexpected and dazzling choice of balance.

Jansons’s RCO recording of Brahms’s Symphony No.2 surprised through unusual attention to inner balances, phrasing embellished with judicious use of dynamics, and a smoother legato sound from the strings than from Jansons’s predecessor, Riccardo Chailly. If anything, this Carnegie Hall performance was even more refined, particularly with respect to the rich string sound, both intense and more robust in the lower registers.

Jansons uses accenting and phrasing to strong effect, in particular the precisely executed, caesura-like ‘silences’ between sustained tutti fortissimo chords that delineate themes in the first movement (the ghosts of Toscanini and Reiner must have been enormously envious). Throughout the first movement, Brahms utilizes agogic accents and phrasing that shift the ‘downbeat’ but under Jansons one had a strong sense as to where the bar-lines actually fall. Jansons and the orchestra achieved an amazingly transparent texture that highlighted contrapuntal inner workings and coloration. Such absolute rhythmic precision – even when Jansons made subtle tempo shifts – was on full display in a finale brimming with jollity and excitement. This was big-scale Brahms – a mixture of dazzling virtuoso playing and evocation.