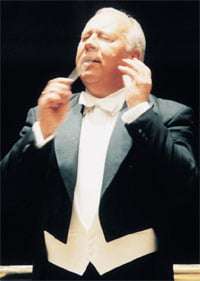 For any conductor standing in at short notice, as Neeme Järvi has done for Mariss Jansons this week (and to include Grenada on the 28th and 29th), there surely are few harder works to cope with than Messiaen’s orgiastic Turangalîla Symphony. Even with a repertoire as wide as Järvi’s (his long discography includes no Messiaen), it is not standard.

Of course, Jansons had already prepared the performance, and conducted it a week ago, before being admitted to hospital the following morning) and the Concertgebouw Orchestra had played the work again under Theo Walters on the Friday and Saturday night.

Any suggestion of careful treading was rapidly dispelled by the wonderful orchestral playing (if you have to stand in for another conductor, having one of the world’s greatest orchestras must surely help). There were details of this fantastic score that had not registered so clearly before; how, for example, the music pares down to solo strings at times, and Järvi elicited some extraordinarily transparent textures. Then there was the way he built the final chord of the fifth movement – ‘Joie du sang des étoiles’: not only physically imposing, but also an object-lesson in the art of conducting.

The ensuing ‘Jardin du sommeil d’amour’ was utterly rapt in its detailed interweaving of Jean-Yves Thibaudet’s free-styling chirruping against tutti strings and Cynthia Millar’s ondes martenot. That the orchestra was enjoying itself was evidenced by principal oboist, Alexei Ogrintchouk’s broad grin down to leader Liviu Prunaru in the penultimate movement (‘Turangalîla 3’), having played some particularly guttural phrases. At the work’s close, the very final chord may just have missed out on ultimate intensity, but that did not detract from the overall impact of the performance.

Thibaudet – more soberly attired than usual (flattened hair and sans coloured waistcoat) – was phenomenal at the piano, making light of the technical difficulties and offering just as incredible soft touches as the thundering passages for which the work is probably best remembered. The balance with the ethereal ondes martenot was nigh-on-perfect. At times, when the two players were in unison, the ondes seemed to engulf the piano to extraordinary effect.

At the end, as he had done the previous night, Järvi applauded his players and quickly marshalled the audience into a regular clapping rhythm (distinctly eastern European), only topped by an encore of sorts, with a percussionist (one of 11) dropping a tam-tam as the orchestra left!

Even without Jansons at the helm, the Concertgebouw Orchestra upheld its highest standards and returns to the Barbican next season to help celebrate Bernard Haitink’s 80th-birthday (14 & 15 March). Neeme Järvi, recently a rare visitor to London, is back for a number of concerts this and next year with the London Philharmonic at the Southbank Centre (29 October & 1 November, then 4 & 7 February). Don’t miss either conductor!