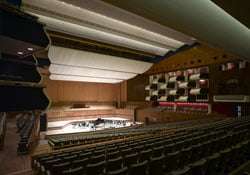 The re-opening of the Royal Festival Hall was well judged – a lack of fuss and add-ons was welcome (both outside and inside the Hall) and a celebratory atmosphere was created nonetheless. To open the three-part concert, Southbank Centre Chairman, Lord Hollick, made a witty introductory speech.

The RFH is returned to London – the extra legroom is welcome, as is the air-conditioning – and the first music heard was Julian Anderson’s “Alleluia”, a substantial piece, at 16 minutes or so, that was refreshingly exploratory and which grew in tumult; Britten seemed a strong presence at times. Anderson’s spectral orchestration and his dynamic writing for chorus was a good test of the Hall’s acoustics. Very positive first impressions a couple of weeks ago (in a virtually empty Hall) were not quite lived up to; certainly clarity and positioning is exemplary, but a little more bass would not go amiss and a certain glassy quality to the treble in fortissimos can hopefully be tamed. Also, could the sound be a little more immediate? The London Philharmonic Choir and Orchestra under Vladimir Jurowski gave a confident premiere of Anderson’s piece. 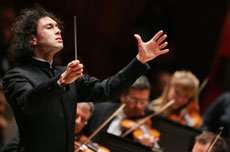 Of course given the variety of music on offer then different reactions to the refurbished acoustic were apparent. The Unanswered Question (Marin Alsop conducting members of all four of the SBC’s associate orchestras) with its invisible strings and spatially located trumpets (just four flutes were on the platform) sounded wonderful, the new ‘aura’ working a treat. But the ‘ethereal’ ambience now present, while in many ways ideal for The Firebird, tends to ‘comfortable-ise’ an orchestra. It doesn’t blank phones ringing, though – just a few seconds into Stravinsky someone’s mobile went off – to a digitalised Mozart 40! Jurowski stopped conducting and went back to the beginning. Hopefully the point was made. The performance, direct to a fault, was given with sheen, expression and precision and was notably fast when King Kaschei appeared if too fleet for to be properly ‘infernal’.

Harrison Birtwistle and Purcell rubbed shoulders in non-conducted performances. In Cortege Birtwistle has re-visited Ritual Fragment (1989) written in memory of Michael Vyner, the London Sinfonietta’s first artistic director. The composer’s love of ritual is central to Cortege. Underpinned by summoning bass drum strokes, musicians come to the front to announce, mingle and cue and then comment from another position. Thus trumpet, violin, bassoon, viola, horn, et al take it in turns to build a powerful ceremony over 13 or so minutes – slightly minimised here by too-early applause – the members of the Sinfonietta absolutely at one with Birtwistle’s design. (Both Birtwistle and Julian Anderson were in attendance.) There was nothing contrary by hearing Purcell next. The members of the Orchestra of the Age of Enlightenment (led by Margaret Faultless), most of them standing, made a joyful and appetising sound.

These smaller forces carried well and sounded good. So too did Ligeti’s Atmosphères, its extraordinary soundworld compellingly revealed by Christoph von Dohnányi and the Philharmonia Orchestra, who then went straight into the finale of the ‘Choral’, both choirs singing from memory. Dohnányi’s musically unimpeachable conducting got to the heart of the matter.

Did we really need Boléro? The opening tattoo from off-platform side drums that eventually settled into the familiar Boléro rhythm was the one miscalculation of the evening. The performance itself – quite swift and featuring members of all four orchestras, Alsop retaining Dohnányi’s antiphonal violins and left-positioned double basses (not her usual preference, but she may be converted) – fell a little short. Maybe Radio 3’s pre-determined timetable is here justified as Boléro seems missing from the recorded broadcast! One wonders if the RFH will be relayed on R3 as it is in the flesh (some reverb has been added in the past)?!

A few reservations on the Hall’s ambience, then, but it will be fascinating to see how it and we adjust as the months go on.