2013 has been a good year in London to hear our non-London-based orchestras. Long ago Texaco sponsored a British Orchestra season at the Royal Festival Hall; but, as Sir Mark Elder remarked when he brought the Hallé to the Royal Festival Hall earlier this year, it was its first visit to the venue in nearly 20 years. Coupled with the BBC Proms and the Southbank Centre’s The Rest is Noise series, London audiences have had a bumper year to sample the excellence these Isles have to offer. 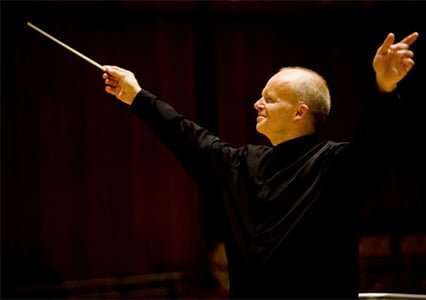 And now we have a new venue, Milton Court, already in its first weeks establishing itself as a London home for the Britten Sinfonia and BBC Singers, as well as the Academy of Ancient Music. But, applaud the audacity of the Royal Northern Sinfonia (the first ‘ennobled’ orchestra for 20 years, since the Royal Scottish National) in promoting itself in a pair of concerts that top and tail Thomas Zehetmair’s twelfth and final season as Music Director, although it has been announced that this partnership will continue with Zehetmair as Conductor Laureate.

This first concert concentrated on Mozart, who shares his Salzburg birthplace with Zehetmair, and included something of a signature piece for Zehetmair with his wife, Ruth Killius, the Sinfonia concertante. They’ve played it together quite a lot, including by torchlight on a freezing winter evening on tour in a small Northumbrian village hall where their efforts failed the electricity and the locals rallied round and brought their own light for the orchestras to play by!

Starting with their backs to the audience, Zehetmair and Killius joined in with the tutti, orchestral violas antiphonally placed, like the violins. Turning only for their solo entries, the interplay was exquisite, with Killius’s scordatura viola sounding very distinctive (which was Mozart’s intention, writing the part for his favourite stringed instrument a semitone higher to make it stand out). This was intense and intensely musical playing, with Zehetmair turning occasionally to use his bow as baton, but communicating more often by smiles and body language. It was a special performance. But that was not all. The encore was the second of Heinz Holliger’s Three Sketches, written for these artists. Entitled ‘Danse dense’ it essays a busy intertwining of both violin and viola (reminding of the faster passages of George Benjamin’s Viola Viola) which requires fiendish concentration from its players, and it didn’t seem out of place in a Mozart concert.

My impression of Milton Court is very positive. Its dark-wood finish, curved circle balustrade, subtly jagged white walls above and a high roof partially obscured by a set of wooden-framed baffles, is matched by an engagingly vibrant sound that is remarkably immediate and offers rich detail. In essence, it’s a modern take of the old ‘shoe box’ design. Zehetmair was at pains to explore the acoustic with the spirited rendition of K136. Interestingly, however, there seemed to be a definite spotlighting of the sound from the front, centre-stage – so that in K364 both viola and violin seemed to overpower the whole of the orchestra.

Mozart’s antepenultimate symphony (K543) came over as large as life, nicely nuanced with just enough malleability to ensure maximum personality, with the only overt concessions to minimum vibrato and small timpani, whilst using modern trumpets and horns. There was a strong impression that this might have been both the sort of timbre and impact the work would have had for the work’s early audiences (if only we knew when its first performance was); a sense of unbridled power – particularly in the abrasive take on the unison opening rhythm of the slow introduction, contrasted with the melting transition into a rather relaxed Allegro. In the slow movement Zehetmair steadily built the delicate dotted figures to their forte final statement, an impetus continued with the triple-beat of the insistent Minuet, before eventually finding contrast in the mellifluous Trio, with its burbling clarinet undertow, highlighting Mozart’s interest in the new instrument. The violins’ burst of semiquavers at the start of the finale, also developed from piano to the forceful repetitions that punctuate the movements fabric, complete with false ending that starts the process again.

In the circle, 40 members of the Royal Northern Sinfonia’s supporters witnessed a fine debut and will no doubt return to see Zehetmair’s final concert as Music Director on 13 June, with the Don Giovanni Overture, Beethoven’s Fifth Symphony, Ruth Killius in Bartók’s Viola Concerto and the London première of John Casken’s That Subtle Knot with Zehetmair as soloist. I hope the RNS makes Milton Court a regular base. London will be better off for that.