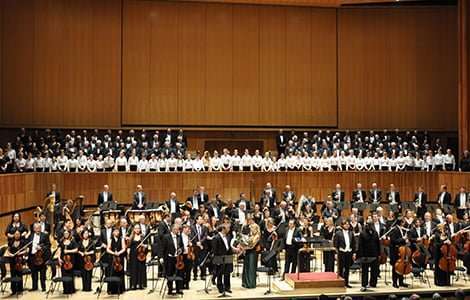 The Royal Philharmonic Orchestra here did itself and Berlioz proud. Dedicating the concert to the late Sir Colin Davis (who made some of his earliest recordings with the RPO, including Mozart and Rossini overtures, Beethoven 7 and Stravinsky’s Oedipus Rex), the choice of composer, as it turned out, could not have been more appropriate, Sir Colin having been one of Berlioz’s greatest and most-consistent champions.

Berlioz’s La Damnation de Faust is, like many of this composer’s works, a conception that defies easy categorisation. It isn’t an opera but invites staging; most recently in London Terry Gilliam threw everything at it for ENO. As a back-story, the 24-year-old Berlioz had composed Huit scènes de Faust, published it, and sent it to Faust’s author, Goethe. His composer-friend Carl Zelter dismissed Berlioz’s offering as “the aborted offspring of a hideous incest … a series of grunts, snorts and expectorations.” Berlioz went on to receive – and live with – such uninhibited criticism. Eighteen years later, undeterred by Zelter’s tirade, Berlioz returned to Faust and incorporated – and expanded – the eight scenes into a “Dramatic Legend”; four large parts now containing a total of twenty sections. It was heard in Paris in 1844 in an extravagant first outing, Berlioz conducting. 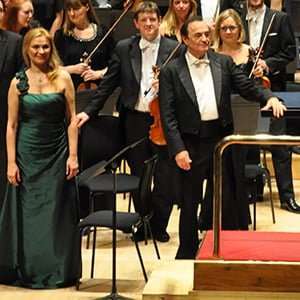 Having previously conducted Faust in London, in 2004 with the Philharmonia Orchestra, Charles Dutoit was here in inspiring form, a master of the piece and a demonstrative if for-the-music presence leading the performers easefully and with vitality. The RPO was in superb form for its Principal Conductor, the strings enjoying sheen and also richness of tone, the woodwinds were full of character, the brass had presence without dominating, and the percussion added much colour to proceedings. The London Symphony Chorus is a veteran of this work, not least with Colin Davis conducting.

This was an excellent without-frills presentation: no speeches, no graphics, no added lighting. Just an invitation to take your seat, read the programme (if needed), which included the French text and English translation, and listen to the music, which more than takes care of itself when the performers are on song, as here. Simples! What did enhance the performance was the purely musical decision to do without an interval. So we had an unbroken 125-minute span of great and inimitable music, with Parts 2 and 3 (between which an interval is often taken) made into a seamless 75-minute sequence that wasn’t a second too long. Other finely-judged touches included the well-timed brass manoeuvres that took some players off-stage for fanfares that were sounded from a perfect perspective; and Berlioz’s version of Faust (including some changes to Goethe’s original) is an expansive work of thought, description and flamboyance.

In both old-age reflection and his Méphistophélès-rejuvenated new lease of life, Paul Groves was an ardent Faust. He was in top form, relishing the notes and the emotions, and he let the Devil take him. As Méphistophélès, Willard White made a jack-in-the-box first entry (from a seated position) irresistibly conniving with Faust through wicked glances and imposing his resonant voice and larger-than-life presence to notable effect. Maybe he lacked oleaginous insouciance in the pizzicato-dominated ‘Sérénade de Méphistophélès’ (Scene XII), but White was in impressive, vivid form; and also rapturous in ‘Voici des roses’ (Scene VII), suggesting that the Devil does indeed have the best tunes. If the under-projecting Benedict Nelson made little of the small role of Brander and his ratty tale, then Ruxandra Donose was a ravishing Marguerite – she took the role in Dutoit’s 2004 performance, and it is little wonder that he wanted her back. She was vocally captivating and enjoyed fine obbligato support from violist Fiona Winning and Leila Ward on cor anglais in two of the most sublime numbers in the score; and she and Groves created an ecstatic love-duet.

The London Symphony Chorus, whether drinkers, soldiers, students or peasants, did all that is required with gusto and consideration, and were properly ironic with the drunks’ reiterated “Amen”, brazen in ‘Fugue on the Theme of Brander’s Song’ and suitably frenzied as “The Damned and Demons” in the penultimate ‘The Ride to the Abyss’ pandemonium given with elemental and doom-laden charge when Hell fully opens its chasm and swallows whole. By contrast the closing ‘In Heaven’ was of celestial charm, the now-entering New London Children’s Choir (54 in number if with only three boys!) adding to the chasteness. It’s amazing what Berlioz achieves here with a few violins, flutes and a couple of harps. He was a genius orchestrator. Posterity has recognised Berlioz but forgotten Zelter.

There were numerous highlights in a performance distinguished for its wholeness. The RPO’s woodwinds were delightfully sprightly (spritely) in ‘Minuet of the Wills-o’-the-Wisp’, and there was some beautiful dreaming – with gnomes and sylphs – in the a moonlit escape for Faust’s vision of loveliness, Marguerite, with some exquisite solo and choral singing, setting-up wonderfully a ‘Dance of the Sylphs’ that was sensitively played. All in all this was an inspiring concert account of Berlioz’s Faust that can stand aside Mark Elder’s LPO reading (RFH) and James Levine’s Boston Symphony BBC Proms appearance. Dutoit’s interpretation was notable for a symphonic gathering of the work’s various episodes, and for being dramatic enough, and sometimes operatically impetuous, but without overt description, which is written in anyway, and for conclusively nailing The Damnation of Faust as being a masterpiece by Hector Berlioz.