Concert 1
Mozart
Clarinet Concerto in A, K622
Schumann
Symphony No.1 in B flat, Op.38 (Spring) 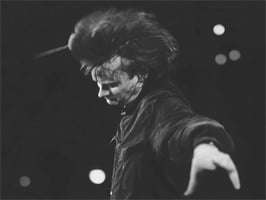 “Opus 60” is the generic title chosen by the Royal Philharmonic Orchestra for a series of double-decker 60-minute concerts, one at 7 p.m. and one at 9, separated by an hour’s break to allow for a leisurely glass of wine served with cheese. These were the first concerts in the series. Schumann’s other two symphonies and more Mozart concertos will follow in a fortnight’s time (21 April) and will be followed later in the year by Dvořák’s last four symphonies in a similar configuration.

Underlying the concept is the idea of a concert as a social as well as a musical event. On this occasion there were already substantial numbers of people enjoying their cheese and wine almost an hour the evening’s first concert. A good house attended both concerts, although it was noticeable that there were considerably fewer people at the later event; perhaps given that the great majority of the audience appeared to be of an older age group who generally prefer not to be out late and who are not constrained by office hours, it might be a good idea to start the first concert even earlier – say 6 p.m., a strategy which has worked well for the Royal Scottish National Orchestra at weekends – with the second at 7.45. This would encourage the older members of the audience to stay for both concerts and, by starting the second half earlier than 9 o’clock, it would not deter the average concert-goer who is accustomed to a 7.30 start.

The best things in each of these concerts were undoubtedly the Mozart concertos, both of which served to remind us that the RPO boasts some excellent individual players – Michael Whight was one time principal clarinet in the Philharmonia Orchestra and Laurence Davies, the RPO’s principal horn since last, was also associated the Philharmonia, for ten years.

Playing a basset clarinet, Whight’s finely nuanced account of Mozart’s Clarinet Concerto was full of light and shade, making the most of its contrasts in a way only possible on a basset, and agile on its feet throughout; it was also festooned in well-chosen decoration. Laurence Davies offered a slightly more sober take on the Fourth Horn Concerto, the one made famous by Flanders & Swann, but it was undoubtedly elegant and polished; although the orchestra’s excellent leader Clio Gould did her best to inject some finesse into the violin section’s phrasing in the slow movement and despite a plangent contribution from the first oboe John Anderson, Grzegorz Nowak – conducting the entire evening without a score – plodded dutifully, offering little evidence of any sense of Mozart style or the ability to shape proceedings.

It was undoubtedly agreeable to hear both of these Schumann symphonies played in a hall this size with an orchestra of these proportions, yet one could not avoid a sense of frustration. The RPO is a very much better orchestra than it seemed on this occasion. It deserves the benefit of a conductor who is not only technically competent but who is also a genuine orchestra-builder – as were both Dorati and Kempe in a previous chapter of its history – whereas Nowak is neither.

Whilst the orchestra did its best under trying circumstances, there was little evidence of unanimity, of anything other than the most basic dynamics nor of music being shaped over longer paragraphs, all elements which should be firmly under the control of the conductor. For the most part speeds were sensibly chosen – with the notable exception of an absurdly gabbled finale in the Second Symphony – but any tempo deviations (such as the two trios in the same work’s scherzo) appeared to present severe problems. If one is going to programme two major symphonies on the same evening, let it be under leadership which has something worth saying and which reflects well on the orchestra.