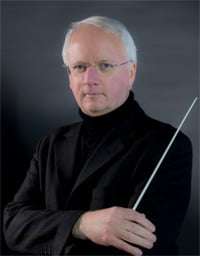 The Royal Philharmonic Orchestra here gave an enterprising programme to a regrettably small audience: more is the pity, as a combination of some excellent playing and a gifted conductor whose UK concert appearances are all too infrequent deserved better – even at a time when economics are hardly conducive to ‘taking a gamble’.

The first half was devoted to Michael Colina, the 63-year-old American composer who has collaborated with an impressive roster of musicians (not least saxophonist David Sanborn) and who seems intent on reclaiming that ‘squeezed’ middle ground currently caught between the vestiges of post-war Modernism and emptiness of most post-minimalist tonality. Neither was evident in The Unbearable Lightness of Being (2009), inspired by Milan Kundera’s novel, in which distantly Ivesian turns of phrase have been absorbed into a cumulatively intense elegy for strings and could reasonably take its place within a notable North American musical lineage.

More ambitious, while being more problematic, is the Violin Concerto (2010). Inspired by a Lawrence Weschler novel, Three Cabinets of Wonder takes three scenarios of the composer’s devising as the basis for a piece with a determined but never-slavish attachment to tradition. Its highlight is a slow movement, ‘Buddha’s Assassin’, whose beatific opening and closing stages – replete with sounds of Tibetan percussion – are the context for a sustained build-up to an elaborate cadenza and an orchestral tutti that powerfully restates the searching main theme. The first movement, ‘Fanny’s Brother’, makes witty reference to the corresponding portion of Mendelssohn’s E minor Violin Concerto in its eventful if overly schematic progress, while the finale, ‘Guardian of the Glowing’, draws on imagery of new-born fireflies in music whose alternating energy and reflection tends to impede rather than enhance progress towards a decisive but overly short-winded conclusion. No doubts as to the excellence of Anastasia Khitruk in a solo part which is never mindless in its virtuosity, with the RPO as unstinting in its rapport as Bernas proved to be a highly attentive accompanist. It all adds up to a likeable and engaging work which ought to possess a ready appeal for audiences on both sides of the Atlantic.

What to say about Górecki’s Symphony of Sorrowful Songs (1976) a decade and more since interest in this most unlikely of ‘hit’ works reached fever pitch? Best, perhaps, to listen to it with the respectful detachment that apparently greeted its premiere in Royan thirty-five years ago and acknowledge its emotional sincerity as well as its deceptive formal simplicity. Which latter aspect came through most strongly in this account – Bernas maintaining a firm though never inflexible control over the strings in those canonic expanses which mirror each other on either side of the first movement’s plangent central setting, then securing a scrupulous balance between harp, piano and strings in the poignant outpouring that follows. With its relatively extended text, the finale is most likely the hardest movement to sustain but, as demonstrated here, harmonic stasis and rhythmic repetition need not make for expressive monotony – not least with the final cadence so deftly and pointedly delayed. Placed high in the gallery, Alexandra Hutton was occasionally obscured by the orchestra but her restrained eloquence carried through – rightly emerging as an obbligato rather than a solo presence in a piece whose directness need not be its chief failing, as the present performance confirmed in ample measure.

Whether Górecki’s Third Symphony might have been the beginning of something new matters but little given its viability as a musical ‘one-off’ that no amount of re-runs by far less able composers could vitiate. Heard objectively, it takes its place near the start of an era of transition which seems not yet to have run its course.