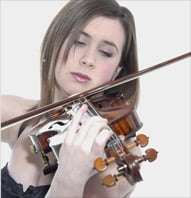 It’s fair to say that Chloë Hanslip made the transition to violin superstardom with her superb Naxos recording of John Adams’s Violin Concerto five years ago. It secured her status as one of the most talented and intelligent young musicians around, a status she has built on with recordings of fascinating, slightly off-piste repertoire and her extensive concert schedule. She was back with the same forces as on the Adams disc, firing on all cylinders in a gripping performance of Prokofiev’s Second Violin Concerto.

From the eloquent solo opening, it was clear she was in complete sympathy with this 1935 work that mixes a broad romantic sweep with Shostakovich-like Soviet anxiety. Her delight in the concerto’s extensive arsenal of mood-changes made the music leap off the page in an extraordinarily vivid and infectious way, and gave her ample opportunity to communicate the charismatic virtuosity of her playing. Her phrasing breathes naturally, and she cast the sort of long, opulent line that must have the pantheon of great romantic violinists murmuring heir approval. She was at her complex, inquisitive best in the ravishing slow movement, giving its Romeo and Juliet-inflected lyricism an unsettling, distracted quality that evoked the spirit of Mahler. On the evidence of this concerto alone, Hanslip is a player in the ‘old souls’ category, an artist of exceptional musicianship, with a wisdom and grace beyond her years.

The concerto was also well suited to Leonard Slatkin’s noted sympathy with pre-war music, and, as in the crisp performance of the ‘Classical’ Symphony that opened the programme, he showed himself to be a superb orchestral craftsman, drawing out elegant playing and negotiating Prokofiev’s carefully calculated harmonic side-steps with urbane good taste.

The opening of the ‘Pathétique’ Symphony – bassoons and violas looming mournfully out of nowhere to very similar effect and orchestration as the opening of “The Dream of Gerontius” – promised more than, in the end, was delivered. Slatkin showed admirable restraint here and in the perfectly judged release in the main allegro, but the overall integrity of the first movement was marred by some pretty eruptive brass playing. Tchaikovsky may lay the anguish on with a trowel in this symphony, but in general he’s quite sparing with the big climactic moments.

There is a land-of-lost-content element that can, or should, subvert the balletic prettiness of the second movement, which didn’t register much in Slatkin’s no-nonsense approach, and then it was back to giving the brass its head in the rumbustious March, more in ‘1812’ mode than a gesture of hard-won defiance, which was capped by a burst of spontaneous applause – the norm these days, it seems. The Adagio finale worked very well, the RPO’s woodwind-players in particular distinguishing themselves and Slatkin looping the endlessly falling phrases of its opening like a slow cascade of black velvet. The finality of the famous gong-stroke sounded appropriately bleak and terminal – but don’t tell the lone applauder, and those who followed, who couldn’t wait to break the gloomy spell. Grrrr!