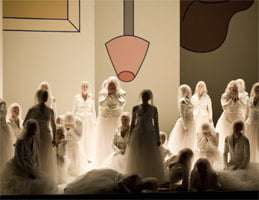 Gluck’s operatic telling of the Orpheus myth rarely gets performed despite its small solo cast requirements – though of course productions are not without their chorus and dancer costs. When it is performed, productions have tended to replace the castrato intended by Gluck for the title-role with a countertenor. Creating a typically exuberant and brilliant performing edition for Paris in 1865, Hector Berlioz re-set the title role for the mezzo-soprano Pauline Viardot-Garcia, and this was the edition performed here in this Stockholm production dating from December 2007 when the title role was sung by Anne Sofie von Otter. 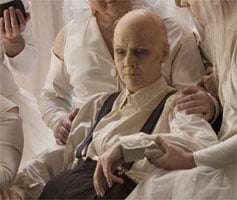 In this alternative casting, the title-role was sung by the excellent Swedish mezzo Anna Larsson who combines a rich and velvety tone with a fluid coloratura technique, and consequently a tonal and dynamic range beyond the capabilities of countertenors. Perhaps in the highest reaches the voice sounded somewhat strained and inflexible, but such moments were few. In this production Orphée is portrayed as an elderly and balding man, and Larsson, with her tall stature and her restrained acting, made the character both believably old and masculine. In her arias she ran the gamut of emotions ranging from despair, wonder, hope, frustration and finally, in the famous final one lamenting the second loss of Eurydice, a touchingly simple sadness. 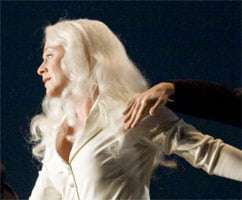 In contrast, the Eurydice of Lisa Larsson was agile and bright, but also mettlesome in character, which meant the duet in which she fails to comprehend Orphée’s coolness towards her and his unwillingness to stare her in the face had a touch of desperation and almost nagging in it. It was a perfect foil. The duet was given a domestic setting with a chair, lamp, doorframe and door, the characters moving around the room as if confined to a routine yet fraught existence.

As Amor, Jeanette Bjurling had to overcome a costume which had her swathed in a white bundle and almost unable to move her feet. She was carried around by some of the dancers and occasionally had to sing when being held aloft, sideways, and in all sorts or diaphragm-compressing positions. Bjurling smiled through all this as if it was perfectly natural. That she managed to sing at all was fairly miraculous – but sing she did and very attractively too. 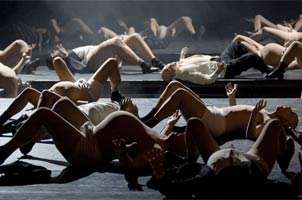 There was much to enjoy visually. When the performance started, the orchestra was placed at stage level, all the musicians wearing black hats – including Sir Richard Armstrong. Then, as the overture began, the orchestra-platform descended into the pit, perfectly depicting a descent into the underworld. The stage settings for the first half (Hades) where black and looming while those in the second act (the Elysian Fields) were white and bright, but with a chair, lamp, doorway and upside-down cooker to remind one that the scene was still in the underworld.

Armstrong and his players produced a thrilling, energetic performance, enjoying the dramatic moments with the Furies as much as the rhythmic, dancing sections elsewhere. Berlioz’s colourful orchestral effects came over with clarity, sounding amazingly contemporary at times. The woodwind contributions were well played, especially the long, beautiful flute solo in the second act.

The director and choreographer had the chorus-members involved in much of the dance and movement, giving them simple but effective routines to enact around which a small troupe of professional dancers wove more intricate displays of choreographic virtuosity. There was a great deal of humour in some of these chorus moments, making much of the non-dancers’ physical variation in size and shape, and gently poking fun at some balletic conventions. Having even the male members of the chorus clad in blond wigs and white dresses helped to underline the wit and care of the direction. The performance was enthusiastically received.