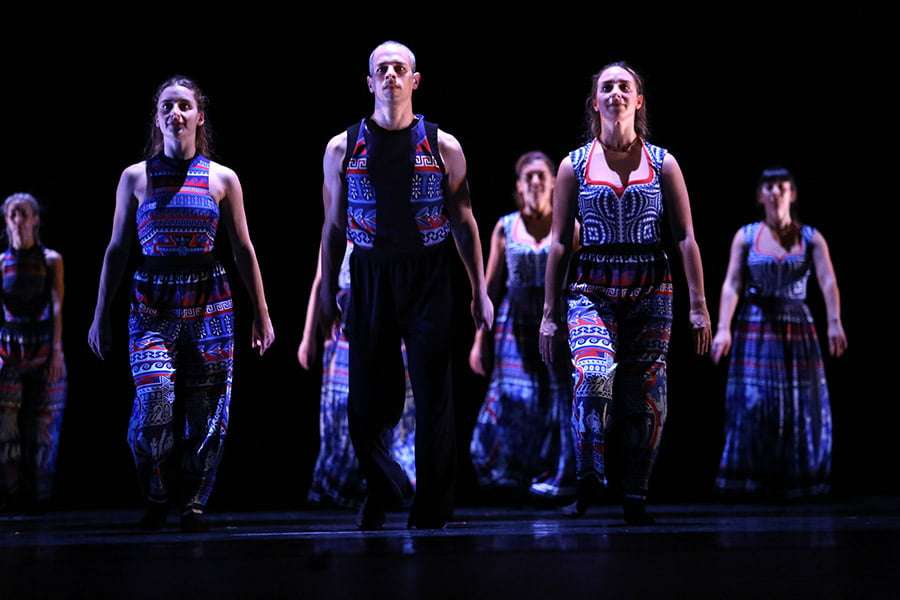 This is a curiosity indeed – a juxtaposition of traditional Greek folk dancing with Russell Maliphant’s particular contemporary idiom. It is a combination in which, in an evening of satisfying variety, the differences between them are not eliminated but rather highlighted, the movement qualities placed alongside each other rather than fused. The brainchild of a Greek promotion company, The Thread emerges from those unpromising beginnings to deliver an experience which is stimulating and often beautiful, down in no small part to the extraordinary lighting design by Michael Hulls, a true choreographer of light.

Indeed, Hulls, Maliphant‘s long-time collaborator, constantly shapes and moulds the stage picture and establishes a myriad of interplays between the movement of the dancers’ bodies and his own creativity. From a pool of golden light in which four seated female dancers move their upper bodies and arms mesmerically, like classical nymphs beside an Arcadian water source, to the changing corridors of light along which the dancers swirl and tumble, Hulls manipulates the stage picture with unfailing discernment.

Maliphant is known for his own brand of weighty lyricism; it is often slow movement, influenced by tai ch’i and capoeira, in which the arms and upper body take precedent, creating swirls and curves which ravish the eye. He is also known for sculptural groupings in which a single dancer is supported, borne aloft, lifted and caught – this is to be seen in The Thread when a quartet of men engage in an organically shifting section of mutual partnering which is one of the work’s real highlights. The Thread uses uncharacteristically large forces for the choreographer, eighteen dancers (six traditional, twelve contemporary) but Maliphant proves to be adept at their disposition, favouring long lines of dancers linked by hands or arms, which create streams of Greek-flavoured movement, enhanced by some clever costuming. The work’s opening is an arresting sight: a line of all the dancers moves silently, almost ritualistically, at a steady pace around the stage, one end sometimes linking with the other, like a choreographic version of the game ‘snake’. At times the line breaks only to re-form, the dancers evoking the dancing figures on Ancient Greek pottery, the effect mesmeric. 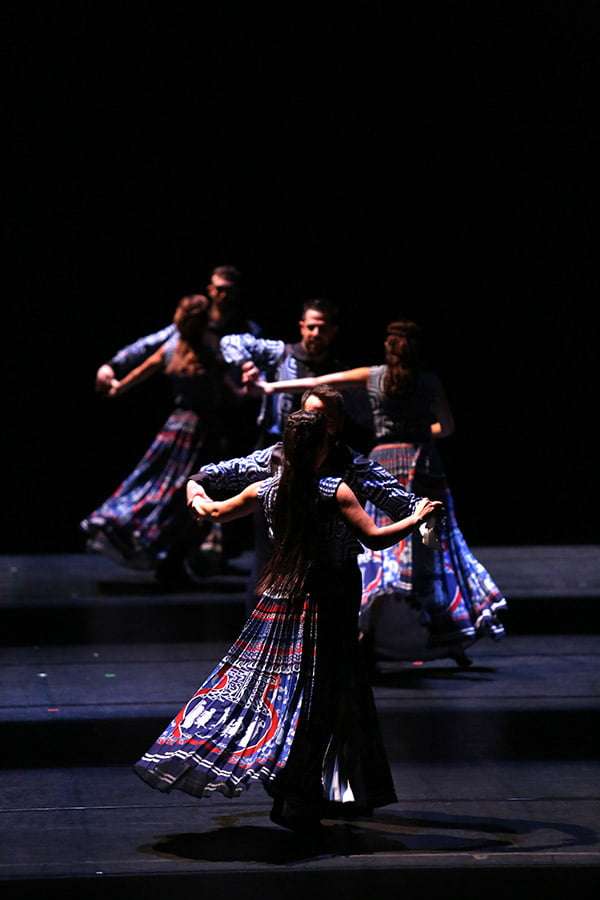 Costumes are clever – the dancers are either in socks or boots for the different sections, the women swapping a floor-length peplos for a shorter chiton or trousers, all in a patterned fabric evoking traditional costume. The changes give added visual stimulus to the different sections. The music is by Vangelis, a weighty, often bombastic score which favours heavy, insistent rhythms which ultimately emerges as wearisome, but is, at times, undeniably effective.

The Thread is said to represent “the energy that connects us with the Universe”, which is a big claim; certainly, there are evocations of time, from the Ancient Greece of the female dancers’ silhouettes and poses to the Turkish-influenced movements of traditional modern Greek dancing and on to Maliphant’s own resolutely contemporary language, but they serve to highlight differences rather than any continuum. Impressive and, indeed, impressively executed the folk dancing in The Thread may be, it always stands somewhat apart from the modernity of the choreographer’s own movement, the contemporary artists’ mastery of the basics of traditional dancing more successful than the inverse. The dancers, all Greek, are uniformly excellent, fluent in their execution of Maliphant’s movement, unflagging during the full eighty minutes, which proves perhaps at least twenty minutes too long. There are sections during which the interest and level of invention sag, so some judicious pruning could have produced a taughter, even more effective, presentation.

However, this collaboration between two very different dance styles, combined with Hulls’ virtuoso lighting, makes for an entertaining, stimulating and ultimately refreshing evening, something proudly different from the usual contemporary fare which is served up again and again not only at Sadler’s Wells but the world over. The Thread may be a curiosity but it is one which il vaut le detour.