Puccini
Tosca – melodramma in three Acts to a libretto by Giuseppe Giacosa & Luigi Illica, based on the play La Tosca by Victorien Sardou [sung in Italian, with English subtitles] 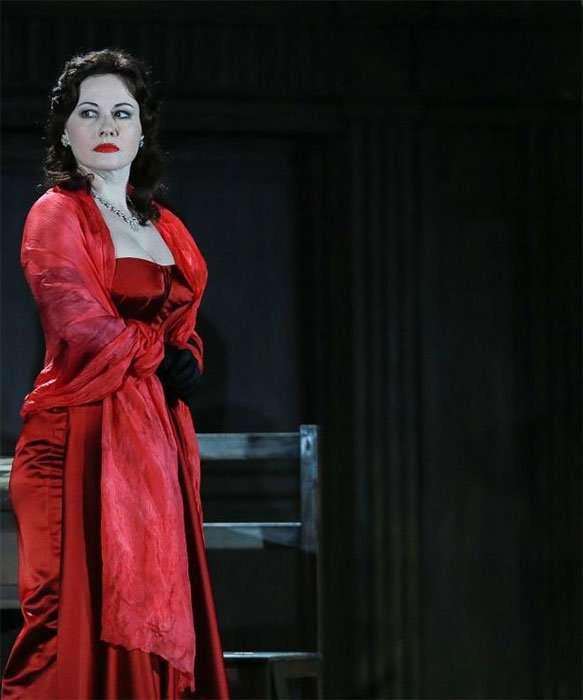 The Russian State Ballet and Opera certainly works hard for a living. Its schedule for this autumn is all-round Britain, and this indefatigable touring company has been doing much the same for the past decade. And who knows what it gets up to in the rest of Europe.

Russian State Opera travels with twelve soloists, an orchestra of about thirty players and a slightly smaller choir. For Tosca at Cadogan Hall the band was huddled to one side of the stage, with a simple, effective staging adapting easily to Sant’Andrea Church, Scarpia’s office and then Castel Sant’Angelo (complete with a silhouette of the statue of the Archangel Michael) taking up the rest of the space, all of it flattered by some clever lighting.

Apart from the fact that the setting was vaguely 1940s, with Scarpia relishing his fascist black-shirt duties, this ultra-traditional production was never intended to tell you anything new about Puccini’s opera, but it doesn’t hold back on its shock potential. It also has a memorable trio of singers in the lead roles. Mikhail Makarov’s personable, rather puppyish Cavaradossi may have given Tosca good cause to be worried about his new painting – a terrible daub that looks highly unsuitable for a church – but his elegant, lyrical tenor landed all the high-voice ardour very satisfactorily in a lovely ‘Recondita armonia’ and a heroic ‘Vittoria!’.

Unlike some Floria Toscas in one’s life, Elena Razguliaeva didn’t spare us or herself as the jealous, big-hearted, even bigger-egoed diva, and, in a nod to extravagant Fellini-esque voluptuousness, she looked stunning in the red gown she wore for Act Two. She was an endearing, insecure coquette in Act One, then really went to town in an astonishingly visceral, blowsy Act Two, the increasingly volatile scene with Scarpia reducing to a thread of sound for an exhausted opening to ‘Vissi d’arte’ that nailed you with its power – and Razguliaeva has a voice to reckon with, powerful, warm with a brilliant top range and a fiery presence.

Act Two turned out to be such a shocker – even Scarpia’s henchman Spoletta was appalled by Cavaradossi’s torture – clinched by Ruslan Sigbatulin’s outstanding Scarpia. This baritone from Astrakhan has the vocal quality, heft and range that breathes Russian style and suited Scarpia’s unhinged menace down to the ground. In line with the no-holds-barred approach, he took ages to die after Tosca had impaled him with a huge dagger, and it made her desperate cries of “Muori!” all the more bloodcurdling.

Valerii Voronin was able to sustain the pressure through close contact with the singers, and the orchestra provided more than enough volume and, as required, subtlety for Puccini’s doom-laden score. From the Isle of Wight to Carlisle, this is a Tosca with which you do not mess.