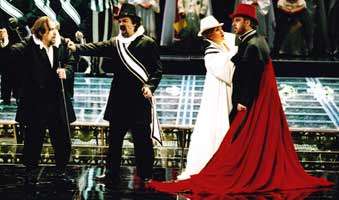 The four-act version of Verdi’s “Don Carlo” is not encountered very much in the UK where, since the famous Visconti production at the Royal opera House in 1957, the Fontainbleu act has become integral to any staging. It was therefore interesting to see this performance and to realize that the omission of that scene-setting first act lends the work a different slant. The opera becomes much more a drama of the politics of church and state and its effects on individuals, rather than a story of doomed love and friendships where the conflict between church and state is causative. In this version you do not see the initial moment of tenderness between Elisabetta and Don Carlo, but you hear about them as the drama unfolds. So in some ways, it is harder for these characters to make an impact as they have less of dramatic journey to make. For the other protagonists their parts are left pretty well intact; their dilemmas and characters therefore seem more familiar, and are stronger as a result.

This was the first night of a revival of Eike Gramass’s generally conventional 2003 staging of the work. Gottfried Pilz’s dark, starkly atmospheric settings are monumental and black, their simplicity allowing the singers and their characterisations to be put first. The initial image of a giant wall of shelves laden with skulls is an arresting one that returns at the end as Don Carlo is dragged away by the mysterious monk to strong effect. It immediately emphasizes that religious or political dissent in Philip II’s Spain was an act with potentially fatal repercussions, and made Rodrigo’s subsequent forthright outburst about Flanders to the King a real act of dangerous defiance. Matti Salminen’s Philip made much of his exhortations to beware the Grand Inquisitor. Perhaps the only scene that did not work was the over-choreographed Auto-da-Fe, which was too cluttered and left all the protagonists invisible at the rear of the stage at the end. Surely you should see their various reactions to the grisly burnings?

This was a strong musical performance all told. Fabio Luisi has made much of his reputation on his Verdi conducting and here showed us why. The Dresden Staatskapelle produced some wonderful playing for him and brought out the distinctive brooding late-Verdi tinta of the orchestration. The woodwind, especially the double-reeds, made much of their contributions, and there was some impressive brass playing for the cloister scenes and in the Auto-da-Fe. The arrival of the Grand Inquisitor with his lumbering, menacing theme was also a highlight. Luisi’s tempi were, on the whole, quite fast and there were only a few moments where one wished for just a little more indulgence – the Act 3 quartet for example. Sad to report there were small cuts aplenty – notably in the final act. However, with strong performances from the principals, this was a minor irritation only. 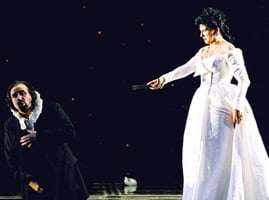 In the difficult title role Zoran Todorovich revealed a ringing tenor, capable of much dynamic subtlety. His was also an engaging presence, even if some of the acting was a little bit hammy to begin with. The Posa was Roberto Frontali who certainly has all the vocal attributes this visionary character requires, but who is absolutely an acting-by-numbers sort of singer. His physical expressions of comradeship with Carlo seemed stilted and perfunctory and one never quite got the sense of the charisma this character should evince. His voice is another matter however – unmistakeably Italian, solid and warm-toned, and with an excellent technique. He delivered his final aria with real style.

Norma Fantini made Elisabetta rather more feisty than is often the case. Her farewell to her compatriot Lady-in-waiting was not an intimate, personal one but an act of intense political defiance directed squarely at the King. She has rather a big voice, which at forte above the stave loses a bit of focus, but she certainly knows how to sing ravishing pianissimi! She also has some power in her lower register, important for the early part of the role, which is rather declamatory and pitched low. Her solo aria at the start of the last act was very finely sung.

With a strong and mettlesome Elisabetta one might have expected Eboli to be less interesting – but Ildiko Komlosi’s interpretation was certainly not that! She dominated the stage whenever she was on it – perhaps almost too majestically and obviously – but as she has shown with her Amneris in “Aida” she has all the vocal guns needed for these big Verdi mezzo roles. So her ‘O Don fatale’, taken at an amazingly fast tempi in its opening and closing sections, had real fire and drama. She also has the coloratura for an effective ‘Veil song’. A big performance from a “big” singer and not subtle by any means.

Best of all were the basses. Peter Lobert’s resonant Monk started the evening well, ably accompanied by the men of the chorus, singing from the rear of the orchestra pit. The absence of Matti Salminen from British opera house stages over the last 20 years or more is nothing short of scandalous given his international reputation as a Wagner singer and in operas such as Boris Godunov. His huge stature in these big roles certainly adds something to his portrayals, and if the top of his voice is not quite so secure and full as it once was, that is a minor cavil. The middle and lower ranges are amazingly rich and supple and he knows what this drama is about. His soliloquy was very poignant and thoroughly deserving of its ovation. The encounter with Hans-Peter König’s thrillingly dark-voiced and implacable Grand Inquisitor was the absolute highlight of this performance. Indeed Hans-Peter König was my operatic discovery of this visit to Dresden. Let’s hope we see and hear him at the Royal Opera in London over the next 20 years!

Further performances this season on 25th and 30th October, though the latter is a “closed” performance www.semperoper.de