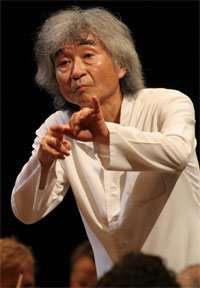 The Saito Kinen Orchestra was assembled in 1984 by Seiji Ozawa and Kazuyoshi Akiyama to honor the memory of Hideo Saito, an important figure in the promotion and teaching of Western music in Japan, on the tenth anniversary of his death. The enormous success of this concert prompted Ozawa to make the Saito Kinen Orchestra an annual event, bringing together alumni and faculty of the Toho Gakuen School in what became an annual ten-day festival in Japan, often followed by appearances in major European cities.

Almost the entire string section of the Saito Kinen Orchestra is Japanese, but the winds and brass are split about 50/50 between Japanese and western players, including flutist Jacques Zoon, playing his wooden French instrument, and the Philadelphia Orchestra’s principal clarinetist Ricardo Morales. The sound of the orchestra is amazingly ‘American’: the strings in particular play with solid unanimity and a pleasing balance of brilliance, and warm resonance from the cellos and double basses.

The present concert is the second in the JapanNYC concert series being presented by Carnegie Hall, a citywide event with Ozawa acting as Artistic Director, exploring Japanese performing art and cinema of the recent past and today from the standpoint of art in a state of continuing transformation. Ozawa was originally slated to conduct the entire concert, but owing to health issues on two fronts – the aftermath of esophageal cancer and a recurring back problem – he is splitting podium duties with Tatsuya Shimono.

November Steps is one of Toru Takemitsu’s undisputed masterpieces and a major landmark in Japanese music. Takemitsu daringly juxtaposed two soloists playing traditional Japanese instruments – chikuzen biwa, a short-necked fretted lute played with a large triangular plectrum, and shakuhachi, an end-blown bamboo flute tuned to a pentatonic scale – with western orchestra and tuning. The latter plays primarily non-tonal gestures which fit well with the sounds of the traditional instruments; Takemitsu calling for the soloists to use not only traditional but extended techniques to produce a pungent palette of timbres and musical gestures. The music recasts the theme-and-variations tradition as sonic events emerge and often disappear into silence; the two soloists play music that sometimes reacts to the orchestral gestures, sometimes seems conversational, and often unfolds in prolonged soliloquies of doleful music that at times fades into and out of pentatonic harmony; the physicality of biwa soloist Yukio Tanaka and shakuhachi player Kifu Mitsuhashi carried the mood of a primal, emphatic ritual. Tatsuya Shimono realized particularly colorful playing from the string section, notably the thickly scored chordal gestures, and kept balances and dynamics under tight control.

After the interval Seiji Ozawa entered the stage, walking slowly and greeting members of the orchestra in the wind section before making his way to the podium, upon which a piano bench had been placed. His gestures were emphatic if a little restrained for the first few minutes, but the orchestra was in full motion, tangibly into the performance from the downbeat. Ozawa was clearly focused on the sudden contrasts and shifts in mood within Berlioz’s Symphonie fantastique, his aural portrait of a composer fluctuating between exuberance and despair as the dreams and nightmares of unrequited love unfolding in five opium-fueled tableaux. Ozawa took enormous care not only to underline the highly individual character of each appearance of the idée fixe melody that runs through the entire symphony but to make sure that many details of orchestration that sometimes get buried by the strings were clearly audible. The pacing and tempos of the first and third movement were generally faster than one usually hears, an approach that not only brings more satisfying pacing to a work as a whole but does not allow the big-picture tension to lag, particularly in the pastoral music ‘Scène aux champs’. Berlioz saved his biggest shocks for the ‘Dream of a Witches’ Sabbath’ finale – Ozawa and the orchestra carried them off as excitingly as one would want, yet the big finale did not for once overshadow the rest of the work.

I had to ask myself if this was the same Ozawa who had conducted so many technically excellent but glib programs with the Boston Symphony at Carnegie Hall during the 1990s and the last decade. This is the Ozawa performance I’ve been waiting for more than two decades to hear – and it was well worth the wait.