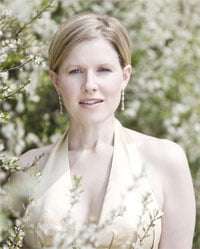 Sally Matthews and Simon Lepper began their BBC Radio 3 Lunchtime Concert with an attractive grouping of early- to middle-period Fauré songs. Matthews’s bright and clear tone was ideally suited to the contours of ‘Green’, whose inner tension resulted from a curious mixture of restraint in the performance and strife in the text. Lepper’s accompaniment in ‘Mandoline’ kept a fine line between elegance and urgency.

The less-often heard Trois mélodies that are Opus 23 bears an immediate resemblance to the Élégie for cello and orchestra, published shortly afterwards. ‘Les berceaux’, sharing the same key of C minor, is strophic and initially gentle, but Matthews understands its gathering emotional intensity. The wide-eyed ‘Notre amour’ featured a superbly controlled final phrase, the slight decrescendo employed on its highest note extremely well judged. Still more affecting was ‘Le secret’, intense and intimate, while ‘Fleur jetée’, taken from the 1884 group of Quatre mélodies, whipped up a bluster with Simon Lepper’s characterisation of the wind.

Alban Berg began Seven Early Songs at the age of 20, though their chromaticism drops heavy hints of the course his musical thinking was to chart in future years. Sally Matthews gave intense performances of each, with Lepper finding the melodic contours within the most complex harmonic progressions. ‘Nacht’ provided the ideal start, drifting in almost unannounced, while the ringing tone used by Matthews to portray ‘Die Nachtigall’ was pure and authentic. ‘Im Zimmer’ was an intensely private reverie, with time slowing as the moment between the two protagonists was fully savoured.

Time stood still, too, at the start of Samuel Barber’s Knoxville, more commonly heard in orchestral guise. This setting of the free improvisation of words from James Agee is one of Barber’s most successful and lyrical vocal achievements, and Simon Lepper deserves immense credit for painting the scene of the summer evening with such skill and attention to detail. Matthews was clear of diction but would perhaps have benefitted from a fuller, more rounded tone for the depiction of the evening in the street. That said, her phrasing was finely controlled, the climax outwardly expressive not just in voice but in body-language too, the singer’s arms outstretched. She caught the passing of time with loved ones that Barber describes so beautifully “on the rough wet grass” and the appealing innocence of the domestic picture easy to relate to. The pair applied a subtle rubato throughout that fitted the text, while Lepper continued to paint vivid pictures, the “clanging of the streetcar” a sudden jolt after the slumber of the opening. This music, however, returned with even greater poignancy at the end, the parallels with Barber’s father, terminally ill at the time of composition and the dedicatee of this piece, impossible to ignore.

As a restful encore Matthews and Lepper gave us Richard Strauss’s Morgen! (Opus 27/4), which featured carefully controlled, quiet tones from both.