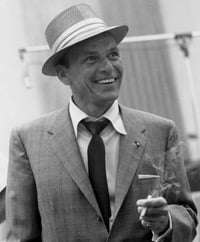 Music impresario and restaurateur Vince Power (of Mean Fiddler fame) has added the Bloomsbury Ballroom to his roster of venues. This is a very grand room, in fact an absolutely huge space in the basement of former insurance-company offices in Holborn. It is ideal for Christmas parties! It is also good as a showcase for a big band such as The Louis Hoover Orchestra, which opened a projected series of events. “Salute to Sinatra” features Hoover himself singing the Sinatra songbook. Louis looks not unlike Ol’ Blue Eyes, although the voice does not have that distinct Sinatra timbre.

Hoover was a co-creator of the West End show “The Rat Pack”, which is no doubt still touring. This had a big band on stage with three singers playing Sinatra, Dean Martin and Sammy Davis Jr plus a female chorus and it was surprisingly good. Sinatra solo, however, is not quite in the same league. The London Palladium recently staged a show that used Sinatra on film interwoven with live dancers that managed to almost recreate the real thing in a clever and absorbing way. On his own, though, Hoover seems too much of a good thing and I would have welcomed a little variation, perhaps with breaks for another (female?) singer or a group just to shake it up a bit. The 17-piece band, however, is top of the range, and it provided a literal blast of great music.

The Sinatra songbook is by no means insignificant. The singer’s career fell into three distinct phases: the early years when he was a bobbysoxers’ favourite, the skinny crooner with the powerful voice who also appeared in MGM musicals. Then, in the early 1950s when he damaged his vocal cords, he turned more to dramatic film acting, beginning with his Academy Award-winning performance in “From Here to Eternity”, which led to other movie roles; and with the return of his voice to even better shape, his famous recordings with Nelson Riddle from “Songs for Swinging Lovers” onwards.

Sinatra’s voice had an easy, almost conversational quality that was almost inimitable, although many have tried. However, Louis Hoover goes through the list of Sinatra’s signature songs and puts his own stamp on them. The material is the best there is in popular music and Hoover tackles it with terrific verve and attack. You can’t go wrong with numbers like ‘It’s almost like being in love’, ‘You make me feel so young’, ‘The lady is a tramp’, ‘Witchcraft’, ‘The good life’, ‘Let’s face the music and dance’, ‘Come fly with me’; ‘That’s life’, ‘All the way’ and ‘Nancy with the laughing face’ (written for the birth of Frank’s daughter by Phil Silvers of ‘Bilko’ fame). One thing that Hoover does have in common with Sinatra is his ability to alter the words of some of the songs, which always infuriated me and annoyed many a sensitive songwriter like Cole Porter.

Of course the evening, with the big band conducted effortlessly by Chris Dean, crescendos with, inevitably, ‘My kind of town’, ‘My Way’ and ‘New York, New York’ by which time the audience is on its collective feet and dancing as if there were no tomorrow.

The evening includes a well-prepared and presented meal and dancing to some terrific big band music. Tickets are £99 or £40 without the meal. For a feel-good show with some of the best songs ever written it makes for pretty unbeatable entertainment.