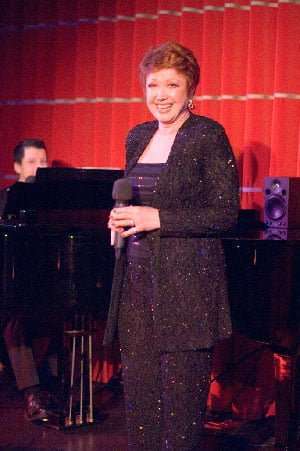 Donna McKecknie has a secure position in Broadway’s hall of fame, having created the role of Cassie in A Chorus Line. She was not allowed to repeat her success in on the West End stage due to one of Equity’s more nonsensical rulings, but London saw her show-stopping routines in the musicals Company and Promises, Promises. A steady career followed, including State Fair and a revival of Follies, and at The Crazy Coqs she is performing a sparkling cabaret act based on her life, conveyed through wryly humorous anecdotes and a truly winning selection of songs.

After a brisk version of ‘Where or when’, McKechnie starts her reminiscences with a potent evocation of New York’s Upper West Side, where she had an apartment after arriving from Michigan in the early 1970s. It was the era of Studio 54, and its trademark promise of sex, drugs and rock ’n’ roll, and the split-personality lifestyle she adopted is acknowledged with Stephen Sondheim’s ‘Uptown-Downtown’, a song written for Follies but replaced by ‘The story of Lucy and Jessie’. His blissfully exhilarating ‘What more do I need?’ (from Saturday Night) represents the fervour of first love, while a chequered romantic life is perfectly evoked with ‘I never know when’, Leroy Anderson’s neglected ballad introduced by Elaine Stritch in the show Goldilocks. McKechnie confesses to an idealised view of romance (“I’m an all or nothing girl”). One of her songs about breaking up is the wistful ‘Where do you start?’ by Carol Bayer Sager, to which she brings a touching vulnerability and sense of heartbreak.

McKechnie’s first Broadway appearance was in the chorus of How to Succeed in Business Without Really Trying, after which she played Philia in A Funny Thing Happened on the Way to the Forum. When she auditioned for the latter, the pianist was a teenage Marvin Hamlisch who, with Edward Kleban, was later to write ‘The Music and the mirror’ for her in A Chorus Line. Like the others who knew the recently late Hamlisch, McKechnie testifies to his kind nature and valued friendship. From A Chorus Line she sings a song she particularly relates to, ‘At the ballet’ – she had started ballet classes at the age of five. An engaging anecdote about meeting her idol, Fred Astaire, prompts a few gliding steps to ‘Dancing in the dark’ and ‘Cheek to cheek’, demonstrating her grace and fluency. Although she does little dancing as such, her act is punctuated with lively motion and demonstrative gestures that make her a constant joy to watch.

She has one of the finest of accompanists, Nathan Martin, whom she acknowledges as much sought-after and, while crediting the venue’s technical scheme, she states, “They tell you that in show business, it’s all in the timing. That’s not true – it’s lighting and sound!” Other notable songs include Irving Berlin’s ‘I got lost in his arms’ and ‘Better luck next time’, Sondheim’s ‘With so little to be sure of’’ and Jim Croce’s ‘Time in a bottle’, and she salutes New York, a city she both loves and hates, with something that summarises just that ambivalence, Portia Nelson’s ‘Hate / Love New York.’ Although over an hour long, McKechnie’s show seems much too short, but one feels grateful to have been in the company of such a fine entertainer.