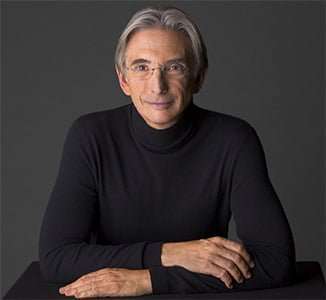 Mahler’s Ninth Symphony, perhaps the pinnacle of the composer’s symphonic output, combines advanced techniques within a post-romantic aesthetic in a manner both forward-looking and nostalgic; one of the greatest symphonies of the twentieth century. For the most part, the San Francisco Symphony under Michael Tilson Thomas acquitted itself well in performing this work with idiomatic flair and grandiloquence. Tempos were generally well chosen, but for the end of the third-movement ‘Rondo-Burleske’, there was failure to attend to the marked increases in tempo that whips the music into a virtual hysteria. Gone though are the affectations that occasionally crop up in MTT’s Mahler performances. Instead, he offered a reading that generally adhered closely to the score, with only a few hesitations to highlight especially significant passages, such as in the first movement where Mahler quotes from Das Lied von der Erde (his song-cycle Symphony). Even the ubiquitous, falling-second ‘farewell’ motto was not burdened with undue weight, but sounded portentously as an ever-present reminder of mortality.

The best aspects of this performance were its impressive attention to detail, crystalline clarity and superb balances. The principal motto figures played at the very beginning resonated fully, distinguishing the important motivic elements of the first movement. Violins enhanced the first theme with a soft, mellow sound, contrasting aptly with the distempered character of the angular second theme. At the beginning of the development, incisive brass seemed to peck at the bones of a dead hero, and the rather somber reference to Johann Strauss II’s waltz Freut des Lebens (Enjoy Life) emerged gradually and hesitantly, as if reluctant to come to the light of day. Here, as throughout, principal horn Robert Ward produced a round tone in the solo that extends into a new brighter section ablaze with brass tattoos sounding vibrant and resolute. Occasionally, the large violin section lacked sufficient sonic breadth to do justice to the music’s dramatic intensity. At the end of the first movement’s development, the sudden outburst of the opening arrhythmic motto in low brass (fff mit höchster Gewalt) was rather bland, weakening this passage’s dramatic effect. Although generally well played, the recapitulation didn’t project that sense of hopelessness in the face of death, yet during the serene closing measures there was some consoling.

Set at a lively tempo, the Ländler theme that opens the second movement began an exaggerated footfall upbeat meant to simulate the dance’s rustic character. The countervailing waltz theme captured its extroverted spirit with grand sweep and dashing élan. But throughout the movement one failed to sense the competitive spirit between these diverse themes – one innocently bucolic, the other sophisticatedly cosmopolitan. They are engaged in a life-and-death struggle to capture the human spirit. Toward the close the Ländler theme did become slightly hysterical, dreading its fate at the hands of the waltz. But the conflict seemed at most like an afterthought.

Vibrant brass sounded aptly demonic during the whirlwind ‘Rondo-burleske’. Although pacing was energetic, the level of intensity never reached fever pitch. Violins played with more thrust than earlier. The calmer middle section seemed to have little impact, but the perky theme of the E-flat clarinet (played admirably by Luis Baez) had just the right frivolous character to make it a perfect foil for the main theme of the finale, which is derived from the clarinet’s phrase. Just before the scherzo returns, suddenly bursting in, trombones and low strings play the two-note upbeat of that theme in the slower tempo of the preceding section, and then abruptly change tempo, making it sound rather awkward. MTT was technically correct in starting the theme in one tempo and continuing it in another. It only seems untoward because few conductors are willing to break up the tempo as the score provides.

The Adagio finale was superbly played by all, the violins coming to the fore with enhanced vibrancy and dynamism, and horns rang out with stentorian tone. The only drawback was the rather attenuated treatment of accents on the ‘turn’ figures that give the opening theme a hymn-like quality. MTT seemed to eschew the mournful character many conductors elicit in this music, making it sound alive with ardent passion. Yet there were tearful moments as well, particularly during the tender strains of the second theme. A world of loneliness and desolation evolved during the solemn opening of the development, bringing relief from the arduous intensity of the exposition. Here one did sense a final struggle to hang on to life, MTT cutting off each of the high C-flats to relate to the opening arrhythmic motto. The recapitulation had the character of a fervent prayer, and the closing measures were blissfully serene, a leave-taking like no other in music.