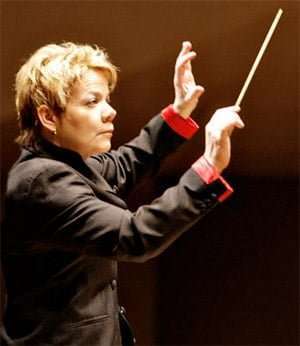 It was in 2012 that Marin Alsop first brought her ‘other’ orchestra to London in the context of the BBC Proms (since when she has enjoyed an even higher profile thanks to her successful piloting of 2013’s Last Night). Back in Brazil her ongoing Prokofiev cycle for Naxos is showcasing rich-toned strings that might already be considered world-class even if the reticent winds and gutsy brass are rather less proficient. The Orquestra Sinfônica do Estado de São Paulo was founded as recently as 1954 and still draws a third of its players from abroad; most of the violinists would seem to be Russian. The orchestra has a reputedly wonderful concert hall in a former railway station situated in the rough area known locally as Cracolândia (Crackland). The team’s interpretative manner is disciplined, even muted, confounding the stereotypes and, perhaps, the conductor’s own jabbing and jiving podium presence.

The present programme, which Southbank Centre publicists portrayed as “a night of quintessentially Sixties music”, was but one leg of a hugely ambitious European tour. At its heart: Leonard Bernstein’s West Side Story, premiered in 1957 from an idea mooted a decade earlier. True, the ‘Symphonic Dances’ extracted with the assistance of Irwin Kostal and Sid Ramin (uncredited in the programme booklet) did not see the light of day until 1961. No matter. The music’s Latin-American elements and Alsop’s own closeness to the conductor-composer in his last years made this a performance of real authority though not, curiously, one with maximal idiomatic swing and swagger. The team was at its best at the very end where ‘I have a love’ was rendered with pristine radiance.

The framing works were both commissioned for the New York Philharmonic during Bernstein’s tenure. Less familiar was the opener by that ‘other’ Brazilian composer, Mozart Camargo Guarnieri (1907-1993). The band recorded his ‘Brasília’ Symphony (1963) for the BIS label under an erstwhile chief, the gifted if less than emollient John Neschling, ousted some years before Alsop’s takeover. As might be expected of a mid-century Koussevitzky acolyte, writing here in 1963 for (and largely in) New York, Guarnieri’s music has as much to do with Roy Harris or Walter Piston as Villa-Lobos. Much the longest movement is the central Lento e tragico. It begins with an exploratory unison melody, initially allocated to the first violins with other strings joining in to lend emotive force before yielding to a central climax with what the composer himself described as a “tragic, crazy feeling”. After some raucous bars of Hindemith gone wrong the music retraces its steps in vaguely Bartókian fashion. The outer panels are shorter and busier, the finale offering predictably vivacious, Latin-American fireworks, brightly scored but a tad short-breathed and melodically unmemorable. On the night the whole piece was over in less than twenty minutes. The programme booklet claimed that Guarnieri “was appointed conductor of the magnificent São Paulo Symphony Orchestra” nine years before its foundation – quite a feat!

The revival of Berio’s 1967/9 Sinfonia (involving the current manifestation of the Swingle Singers associated with the piece from the outset) was, in this context, usefully totemic, summing up the revolutionary possibilities of its era in politics, popular culture and the arts. Another error in the programme booklet needed correction however: Bernstein did not conduct the work’s premiere with the New York Philharmonic – the composer himself did, the fifth movement being added subsequently.

No doubt Sinfonia’s aura of provocation and ‘happening’ has faded, only partly because performances have acquired a softer grain. Big ideas are out of fashion yet the sense of optimism Bernstein detected in Berio’s carefully crafted aural imaginings, a quality not invariably associated with the avant-garde, has endured. The coolly evocative second movement written in homage to Martin Luther King and using the sound of his name as a source of timbre has not lost its potency. The third is still perhaps music’s most exhilarating example of collage, famously redeploying the corresponding movement of Mahler’s ‘Resurrection’ Symphony as an “underground river” which carries forward musical and verbal allusions of all kinds. Berio’s juxtapositions cannily offer something for everyone: these days the musical quotations are listed on Wikipedia! It might be “getting late” but we, like music itself, are enjoined to “keep going” (after Samuel Beckett). I had not remembered that the first movement draws upon texts in which Claude Lévi-Strauss analyses the structure and symbolism of Brazilian myths as emblematic of universal cultural laws.

The eight vocalists required to recite the words and create the more or less subtle vocal effects were placed centre-stage and balanced more prominently than Berio intended, cordless mikes allowing more freedom of movement than in the past. Further back, stage left, the LSO’s John Alley was an unexpected addition to the ranks, responsible (I think) for the electric harpsichord, invisible and largely inaudible.

A few walk-outs apart, the audience response was enthusiastic, the reward an unexpected encore: a fleshed-out version of Victory Stride, the title track of one of Alsop’s lesser-known CDs devoted to the symphonic music of Afro-American stride-pianist James P. Johnson. Throughout the evening a linking narrative was provided by the conductor. I am not usually a fan of such interventions, seemingly obligatory in concerts corralled under The Rest is Noise umbrella, but Alsop is a real communicator, crisp, funny and unpretentious. We are put at ease and on her side.

This was a Shell Classic International concert. In another unscheduled extra, climate activists from “Shell Out Sounds” contributed a sung protest against the sponsoring oil company, making a dignified exit before the main event.