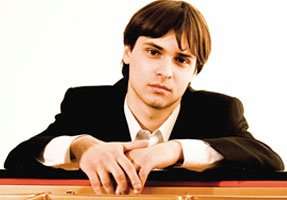 Sasha Grynyuk is a young Ukrainian pianist who is a student at the Guildhall School of Music. Like most of his contemporaries he seems to fit in concerts around an endless list of competition appearances and this Wigmore recital came courtesy of winning the newly created Guildhall Wigmore Recital Prize.

In the first half he made far too much use of the loudness and sustaining pedals. What might work in larger halls is unnecessary in a smaller one, especially one with such fine acoustics as Wigmore Hall. This compromised the Haydn and made it more difficult to fully appreciate the almost Chopinesque sound of the second subject and the varied phrasing in the repeat. The Minuet was too loud and the sense of threat that Alfred Brendel imparts to this wonderful movement was missing. In compensation, the outrageously inventive finale was given a powerhouse performance.

György Ligeti’s Etudes are outrageously difficult. In ‘Der Zauberlehrling’, Grynyuk realised the jazz- and Bartók-like rhythms and the climax was very loud. ‘Arc-en-ciel’ is a beautiful nocturnal reverie and the pianist revealed every facet of it. He also proved that he could conjure a magical ppp. However ‘Fanfares’ lacked fantasy and caprice and the massive bass chords lacked savagery. Without scores it would be difficult to say how accurate Grynyuk was, but there was some unevenness in the right-hand in the first piece.

The ubiquitous Prokofiev Seventh Sonata closed the first half. Why pianists don’t play the great Sixth and Eighth more, is beyond me. Together they form a wartime trilogy and are even finer works. Grynyuk, at present, lacks the ability to convey the true melodic outline of the opening paragraph and he seemed to be caught in a rhythmic straightjacket. The start of the hymn-like slow movement was far too loud, the tone didn’t sing and the central section’s series of climaxes were pounded out. As in the Haydn, the ferocious finale brought out the best in the artist.

After the interval Grynyuk seemed a changed man. The use of the pedals was more restrained, and the playing less driven. The opening C major Prelude was slow and rose and fell beautifully. In the Second and Fourth I almost fell of my seat! Here was a young pianist using exquisite, totally natural, rubato, indeed the hands were actually out of sync, the left leading the right – marvellous old-world pianism that Alfred Cortot would have admired. Every piece was superbly realised. There was tremendous attack in Eight, Ten sounded like a will-o-the-wisp and the ‘Raindrop’ (No.15) flowed with superb dynamic shading and, again, rubato. This was pure poetry. And the concluding three Preludes, which form, in effect, a finale, had impetus and cumulative power – a great performance.

If, at present, Grynyuk lacks an extensive tonal palette and can be overly aggressive, he also has enormous potential and the Chopin would be exceptional in and at any age.