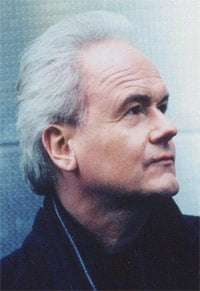 Coming under the auspices of this year’s London Jazz Festival, “Scene Norway” provides an extensive overview of contemporary Norwegian culture; one that, alive with innovation, needs only a showcase such as this for its sheer range to be appreciated. This opening event began with a substantial discussion on all things Norwegian, followed by an interview with and a recital from Ketil Bjørnstad.

Now in his mid-fifties, Bjørnstad has followed an unlikely though distinctive creative course from his beginnings as a classical piano prodigy to jazz pianist and sui generis composer, while not forgetting his success as a poet, critic (on which career he embarked as a student simply to earn money) and novelist (his latest, “To Music”, appears in English translation next spring). Were he also a singer, one might describe him as a latter-day Leonard Cohen, and his music is often redolent of the Canadian master in its fastidious tonal sense: ‘easy listening’ of the deepest and most inwardly intense kind.

An imposing figure (and one who, by his own account, was once much bigger!), Bjørnstad at the piano compels attention without seeking to dominate the relationship with his audience. Nor does his music, which takes hold of the listener through its frequent though understated pivoting between relative modality and relative dissonance.

His hour-long set consisted of five pieces: the central one drawn from his suite Listen, the two either side taken from Floating and the outer two seemingly free-standing pieces that in themselves underlined the formal and expressive breadth of his music – the first piece a 16-minute epic that veered between unforced melody and pungent rhythmic repetition, the last half that length and occupying an equivocal middle-ground at once lyrical yet elusive in intent. Played from memory, this is neither improvisation nor composed music – Bjørnstad following a pre-ordained trajectory while shaping detail and texture according to the spirit of the moment.

A notably attentive audience clearly relished the hour spent in Bjørnstad’s company – at the end of which he responded with a winsome number, Agnes at the Fjord, as an encore. The detailed yet warm ambience of Kings Place Hall One was ideally suited to such humane music-making, and it is to be hoped that Bjørnstad will return soon – perhaps as part of a larger ensemble (he is a collaborator second to none in today’s European jazz scene). In the meantime, those interested should check out his discography; particularly on the ECM label – for whom his recent disc with Randi Stene, “Songs of Love and Fear”, is a synthesis of classical and popular song such as only so singular a musician could pull off.