The Scharoun Ensemble Berlin, founded 25 years ago by members of Berliner Philharmoniker, is named after architect Hans Scharoun, designer of the Philharmonie in Berlin, one of the most acclaimed architectural achievements of the 20th-century. The ensemble is based around the ‘classic’ octet instrumentation (string quartet, double bass, clarinet, bassoon and horn) but frequently ‘borrows’ players from the Berlin Philharmonic and features guest artists, as it did for this recital at Zankel with pianist and composer Thomas Adès.

The program opened with Schubert’s Notturno for piano trio, but the playing of the main theme by Christoph Streuli and Nicholas Altstaedt over Adès’s muanced accompaniment had one thinking more of Schumann or early Brahms. The central section, which some scholars believe is based on a workers’ song Schubert heard in Gmunden, sounded more solidly within the composer’s familiar chamber music style, a world away from the lullaby-like main theme.

Adès’s Piano Quintet was written in 2000 and is cast in a single extended sonata-form movement (including an exposition repeat), with one foot planted in the European art-music tradition and the other in 20th-century post-tonal territory – though the work never strays fully from the world of tonality. Adès builds the musical material from a group of small motifs, including a do-re-mi supported by ‘horn fifths’, a rising minor third in unison (which sets up a recurring skirmish between major and minor tonalities), and one motif reminiscent of Bartók’s chamber music for strings. 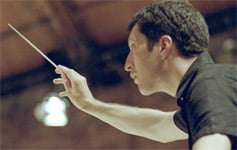 The Ensemble brought particular attention to the work’s strong rhythmic impetus that often pits instruments against one another in feuding meters or sharp accelerandos, and the Scharoun’s playing of Adès’s sparingly-used string harmonics yielded particularly striking moments. The string players responded to the music’s propulsive nature, bringing not only spiky precision but unexpectedly deep sonority; Adès showed both outstanding technical finesse and superb talent as a collaborative musician. The concert’s program notes made reference to Stravinsky, but Adès and the Scharoun Ensemble at times evoked more than a passing resemblance to early Alban Berg, escaping the bonds of tonality only to be pulled back into it, even if in the guise of complex chromaticism.

The Scharouns’ ‘calling card’, Schubert’s Octet, concluded the concert, providing a showpiece: warm and euphonious sound, with a remarkable blend between the winds and strings and near-flawless intonation. The seamless legatos (not limited by any means to the cantabile second movement Adagio) and precise yet soft-edged attacks are part of the familiar Berlin Philharmonic resource, but the Scharouns add a few touches of their own – nuanced rhythmic flexibility (used to especially delightful effect in the fourth movement Andante con variazioni), physically animated and engaged playing throughout, and an amazingly consistent sonority from pianissimo to fortissimo – demonstrated most brilliantly by Altstaedt, whose tremolo opening note of the finale rose out of silence to an overpowering forte. Zankel Hall can often sound a little on the bright sound, but the Scharouns never sounded so; in fact, Peter Ringelbauer’s double bass playing had the effect of almost shaking the room without overpowering the rest of the musicians.

Schubert may have modelled his Octet on Beethoven’s Septet, but the Scharoun Ensemble’s performance provided an eloquent musical argument that Schubert outdid the ‘master’ with a marvelously entertaining and forward-looking masterpiece.