The first three prize-winners in the 2007 Wigmore Hall International Song Competition returned for this recital without having to undergo the prescriptive conditions of that event. They did not need to prove themselves polyglot or masters of a range of styles or even of different composers. To celebrate Schubert’s birthday Graham Johnson devised one of his legendary theme-related programmes. The pianist was in top form in supporting the singers. Perhaps he dominated proceedings rather more than he would with established artists. Here he resembled a father-figure and one’s attention was drawn more often to the expressive narrative on the piano.

The allocation of songs was prudent. Robin Tritschler has a voice with a consistent liquidity of tone, attractive but rather monochrome. He was given two solo pieces in the first group, “The Madonna and Daughter” which express innocence and piety. His sweetness of tone and unsophisticated delivery were ideally suited to the opening “Marie”, while the line in “Das Marienbild” never rose above mezzo-forte. The latter was, however, not at the expense of religious fervour, even if the poem by Aloys Schreiber, with its mention of angels, divine grace and heavenly peace does not avoid tipping the balance from reverence to sentimentality. 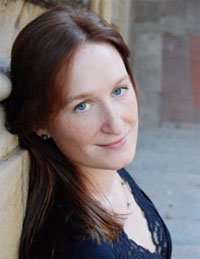 Martha Guth’s two contributions to this group were to poems by Goethe and Schiller, no less. “Gretchens Bitte” revealed a big voice held in check for most of the way until allowed to open out in the final desperate pleas for release. “Thekla: eine Geisterstimme”, delivered from beyond the grave by a woman who has successfully won salvation and now contentedly proclaims the redemptive power of faith, began and ended in a disembodied pianissimo, sung from a backward position on the platform. Guth returned to the front for “Des Mädchens Klage”, in which it was Johnson’s emphasis on the inner voices in the accompaniment which caught the ear. As so often during the evening, he took the lead in setting the interpretative pace.

The second group, focusing on “Woman as Mother”, began with a wickedly prurient “Die Männer sind méchant”. Guth’s whoop on the first syllable of that repeated adjective, the differing inflections given to the whispered greetings of “Guten Abend” and “Schönen Dank”, and the lascivious build-up of the final line conveyed the rare flavour of comedy in Schubert’s oeuvre. Quite different was the pride in the maternal function that she communicated in the 1815 “Wiegenlied”.

For this second group Guth was joined by Ben Johnson, whose voice is more lyric-tenor than Tritschler’s, with a greater range of colours. He showed his interpretative potential in applying a lightly ironic tinge to the folksong-like “Alte Liebe rostet nie” and then shared the highlight of the evening, the late (1827) “Vor meiner Wiege”. Some may find Karl Leitner’s poem maudlin but Schubert treats it on its own terms. The poet, stimulated by the sight of his erstwhile cradle, reflects on the helplessness and dependency of a baby. This leads to his appreciation of the part played by his mother in offering security and protection, which he will only subsequently experience in the grave. Finally he hopes her reassurance will extend to the moment of death. Schubert sets the opening section as a lament with hymn-like accompaniment, before expertly signalling a change of mood in its final line. The style broadens to a flowing lyricism more associated with love- or nature-poetry in the passage of tribute to his mother. Then the ambiguous attitude to death as both fearsome and welcome (very much in Schubert’s mind at the time of “Winterreise”) is dramatically broached with a sudden fortissimo and rapid diminuendo at the words “Vielleicht, wenn das grüne Gras mein Dach”, a dynamic contrast also embodied in the two statements of the last line, before the dirge-like postlude which re-asserts the opening mood. Ben Johnson turned each musical corner of the setting with aplomb and both he and his pianist-namesake trod the emotional borderline between realisation of mortality and mummy’s-boy sentimentality convincingly.

After the interval it was “Woman as Lover”. For the Johnsons the change from the intensity of “Vor meiner Wiege” to the flippant delicacy of “Lied des Florio” and the strophic simplicity of “Wiedersehen” was impressively accomplished. In the former the accompanist stirred us with the infectious rhythm of the writing and then treated us to a witty postlude. Indeed, throughout the evening, Graham Johnson made minor miracles of character out of the solitary few bars with which he was left to provide a conclusion to several of the songs. His namesake’s legato in the shifting lines of the latter was impeccable and his control of the dynamic contrasts in both made one question why these songs are not more frequently heard. Separating these songs was the contrasted “Delphine”. Here the pianist has to reflect Schubert’s inventiveness in a setting that can otherwise seem rambling and the singer the destructiveness of love. Guth returned with a suitably harsher tone colour and let rip excitingly above the stave in the double climax of the song.

“Woman as Goddess” brought a nicely modulated performance of “Atys” from Tritschler, while the two Johnsons rose to the operatic demands of the great scena “Der zürnenden Diana”. Ben Johnson, clearly an interpreter of considerable acuity, conveyed Actaeon’s defiance, the mesmeric effect on him of the goddess, and the sexual fulfilment in death with which the song ends.

The evening concluded with “Woman as Wife”. Tritschler exhibited his purity of tone, entirely free of the throat, in “Minnelied” and the sublimely peaceful and resigned “Der Winterabend” but the motion of the voice in the extended phrases of the latter was rather too angular. He had a nominal part in the duet “Hermann und Thusnelda” but it was Guth who dominated this song (part of which was later recycled for “Ellens Gesang I”) in which the warrior’s wife exults in the hero’s machismo. This is clearly a strong lyric soprano in the making and it is no surprise to learn that her operatic repertoire includes the Countess, Donna Anna and Konstanze.

The singers had been heard in various combinations for duets during the evening. Guth and Johnson gave everything they had in theatricality to “Eine altschottische Ballade”, each exclamation “O!” given varied treatment, but it is a static piece compared to Loewe’s great ballad “Edward”, to the same text. The little-known duet version of “Nur wer die Sehnsucht kennt” has much more to offer: having two singers and varying their use multiplies the effect of the piece; it should be heard more often.

The encores were a typically ingenious piece of planning by Graham Johnson: As he put it, when a woman is unable to choose between two suitors, there is always the solution of becoming a nun. So it was “Nähe des Geliebten” shared between the two tenors (Tritschler seemed to bring marginally greater power to his verses than did Ben Johnson), while for her encore Guth enacted “Die junge Nonne”. All three should have good careers, while it is to be hoped that Graham Johnson will not cease his support and promotion of young singers.