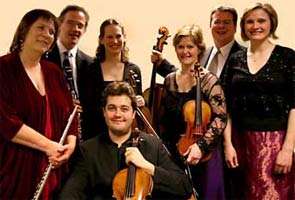 The Nash Ensemble here celebrated Franz Schubert’s birthday; he was born on 31 January 1797! The recital opened with the Quartettsatz (for string quartet), in which the suave, sweet phrasing was marred by some less-than-perfect intonation. A greater sense of intensity would also have been of benefit.

In the programme note, the piano-trio Notturno was described as a “gem”, which is a bit like saying the Kohinoor diamond is a piece of carbon. The sublime melodies and mastery of form and transition are almost God-given. Thankfully the Nash players adopted a slow tempo, the phrasing smooth; unfortunately, the contribution of the pianist was less than ideal. His ‘song’ against a pizzicato string background was too forceful, he sounded splashy in the central section, and when the opening theme returned there was no soul. What should be an elegiac outpouring was severely compromised.

Then came “The Shepherd on the Rock”, where both clarinettist and pianist were little more than clean. However, Ailish Tynan was in a different class. The voice is incredibly rich and controlled. For anyone bored by the inexpressive unconnected notes that so-often passes for singing today, Tynan’s use of vibrato and portamento would have been a joy. One upward swoop made my hairs stand on end. This was something that Baker, Lehmann and Seefried would have recognised as ‘singing’ and as ‘interpretation’. The only problem was that the richness of the tone made it difficult to understand some of the words. If Tynan can overcome this, the sky’s the limit.

In the ‘Trout’ Quintet, there were slight variations of tempo and a rich sonority to the string sound. Ian Brown was rather more sensitive than previously. However, more attack and use of sforzando would have been beneficial. In addition, the intimate conversation that is at the heart of great chamber-music-playing was only occasionally apparent.

Elegance at a flowing tempo marked the second movement. Much the same could be said of the scherzo: by now the smoothness of the playing was beginning to rob the music of some of its character and string intonation was awry. The fourth movement’s opening violin-led theme needed more expression and tone and the pianist reverted to simply playing the notes. Nonetheless, this almost Palm Court approach was beguiling. The finale was civilised but more variety and strength were needed.