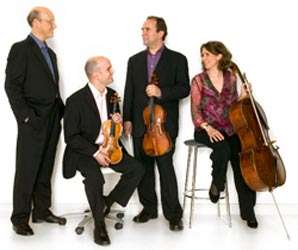 Concluding its worthwhile series centred on chamber works by Enescu and Dvořák, this Wigmore Hall recital by the Schubert Ensemble featured the Piano Quintet that – while it might not be the finest achievement of the former’s maturity – is his most emotionally wide-ranging. Intriguing, too, in that it went virtually unremarked upon during the composer’s lifetime (though it seems to have been complete around 1940) and only received its first public hearing in 1964, with the Ives Ensemble undertaking its UK premiere as recently as 2002.

In common with the other large-scale works from Enescu’s later years, the Piano Quintet is as formally subtle as it is expressively oblique. Nominally in three movements, the opening one unfolds a leisurely sonata-form whose main themes complement each other in their understatement, followed by a compact yet intensifying development that leads not to the expected reprise but a slow movement whose sonorous string-writing and often-sombre eloquence is striking even in the context of Enescu’s maturity. After this, the third movement is a masterly synthesis of scherzo and finale – the initial section bringing the work’s most rhythmically incisive music, contrasted with the suavity of its ‘trio’, before heading into music whose cumulative momentum is in the nature of a reprise for the whole work, and one that finds its apotheosis in the most resplendent of codas.

As good as were the Schubert Ensemble’s previous Enescu readings, this account of the Piano Quintet was something else again; indeed, the piece can seldom, if ever, have received such a fine performance. For all its density of content, the music’s long-term progress was as securely expounded as its extremes of rhetoric and inwardness were inextricably fused. In consequence there was never anything tentative or unfocussed over the course of the work’s 33 minutes, nor did the playing lack for anything in conviction. And, whatever its rough-edges next to the Second Piano Quartet or Second String Quartet (owing to a greater absence of pedal or expression markings in the score rather than any tentativeness in the writing), the Piano Quintet’s ultimate impact could hardly be doubted – making it the most complex yet also most approachable of these pieces.

As a curtain-raiser, Beethoven’s Allegretto for piano trio – written in 1812 for the ten-year-old Maximiliane Brentano – was ideal; the disarming simplicity of its themes being deployed in a structure whose succinctness belies a maturity borne of experience often redolent of what Enescu himself was to achieve over a century later.

After the interval came Dvořák’s A major Piano Quintet (1887), the last and most immediately appealing of that series of large-scale pieces in which the composer re-made the stylistic tenets of Brahms in his own image. Certainly there could be no mistaking the provenance of the present work – whether in the expressive as well as formal dexterity of its opening Allegro, emotional ambivalence of its ‘Dumka’ (its main theme likely in the thoughts of the author of the 1947 song “Nature Boy”), the vitality of a Furiant-informed scherzo or the ease with which the finale moves between melodic insouciance and contrapuntal dexterity on its way to an affirmative close.

Again, this was a vibrant and unfailingly sympathetic performance from the Schubert Ensemble – teasing out the many subtleties from this invigorating music. Good news that these musicians are to record this piece later in the year: before that, look out for the coupling of Enescu’s Piano Quintet and Second Piano Quartet – due from Chandos in June.